Cecil Clarke’s widely expected entry into the Progressive Conservative leadership race will benefit with the addition to his campaign team of Chad Bowie.

Bowie, a native of Monastery and now a Haligonian resident, is going to run the Clarke campaign, The Macdonald Notebook understands. 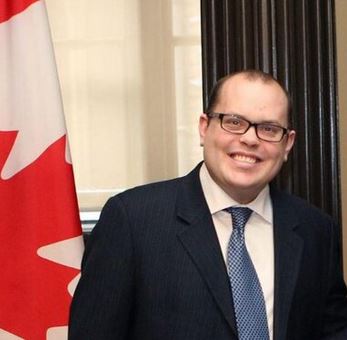 Not yet 30, Bowie was the campaign manager for the Jamie Baillie Tories in the last election when Bowie’s campaign strategies helped to nearly defeat the Liberal government of Stephen McNeil, which took only a two seat majority last spring.

Bowie did not make himself available for a Macdonald Notebook chat, but his work to organize the Clarke campaign could help give the Cape Breton Regional Municipality mayor an advantage, because millennial Bowie is a skilled election strategist.

Don’t get fooled by his age — he is a fresh-faced 27-year-old who has studied election strategy for years and closely follows American politics, where electioneering is practiced as an art.

A self-described political junkie, Bowie is a modern day version of Keith Davey, the Liberal rainmaker who ensured Pierre Trudeau won many election outings in the 1970s and early ’80s.

Typical of a backroom stalwart, Bowie rarely talks to the media and would rather see his chosen candidates get ink in the newspapers.

“It stems from my belief that it is the candidate and not the backroom operator that should be featured during the campaign,” he once explained to The Macdonald Notebook.

To understand Bowie’s skill set, I refer to a former interview I did last spring with former John Hamm aide Chris Lydon, and who comes from a top Halifax south end pedigree. His late dad was noted architect Bill Lydon, who designed many iconic downtown Halifax office buildings, including Marriott Harbourside near Purdy’s Wharf.

Lydon, now in his mid-40s, paints a story of Bowie being one of the Tory party’s leading strategists in Canada, someone who lives and breathes all things political.

Bowie grew up in tiny Monastery close to the Canso Causeway, in a county where politics is a blood sport.

His father is a welder and his mother operated a corner store in the community, which Bowie often visits. During his weekend sojourns to visit his folks, he goes to pray at St. Peter’s Roman Catholic Church in nearby Tracadie, where Father John Barry gives colourful Sunday homilies.

Bowie knocked on doors in junior high school for former deputy premier and Antigonish MLA Angus ‘Tando’ MacIsaac, one of the more active MLAs Antigonish has seen in generations. He paved a lot of roads, including routes into cottage country.

“Chad is in the top tier of political organizers, election readiness organizers in the country. He has cut his chops in virtually every province,” says Lydon, a former chief of staff to Stephen Harper minister Kellie Leitch, and now a senior VP with M-5, a PR, ad agency and government lobby firm based on the Halifax waterfront.

“He has been sent as a top level mercenary for virtually every Tory organization across the nation for provincial elections and byelections,” Lydon tells The Macdonald Notebook.

“For a younger guy, he is quite experienced, level headed, and rally good at political strategy.”

Aside from political acumen, Lydon says Bowie “is very funny, and renowned in the Tory party for his sense of humour.”

One of Bowie’s talents is studying election voting data and understanding voter research, something that the Tory party is renowned for during elections.

“He certainly loves what he does,” says Lydon, adding Bowie’s prolific electioneering has created a seasoned and calm 27-year-old. “He is seasoned enough now that his temperament is quite mature.”

Bowie, now a Haligonian, was drafted by the Harper re-election committee in Ottawa in the 2015 federal vote.

In the Harper war room, he worked on files in the Atlantic area, a posting that was a big deal, and illustrates Bowie’s political skills resonate among top Tory brass.

For the Harper job, he was personally asked to join the national Tory effort in 2015, during the federal vote by the party’s then-national campaign manager Jenni Byrne.

It was the second time Byrne, possibly the most powerful woman in Tory Canadian politics, recruited him to the nation’s capital.

Back when Bowie was 24, he joined Byrne, then running the Conservative party HQ.

Ginny Movat, a government lobbyist in Ottawa has been a friend of Bowie’s since the days they were political science classmates at university in Halifax.

“We developed together in the Nova Scotia Progressive Conservative world as we were friends. He had already been involved and he was a great person to get me connected to all the players,” says Movat.

The two were also pages at the Nova Scotia legislature at the same time, when Tory premier Rodney MacDonald-led government.

Movat is a big Bowie fan.

“His expertise in Atlantic Canada is very much valued (in Ottawa),” she says. “Chad is considered in Ottawa as one of the foremost experts on the Atlantic region, specifically Nova Scotia. He knows the people on the ground.”

Movat says Bowie approaches his daytime job in politics as a passion, not simply a chore to collect a salary.

“At a very young age, as a pre-teen he was exerting himself going to the offices of the local MLA, trying to volunteer, trying to get involved,” she says.

“So to be able to find a pretty impressive career around something you were interested in as a kid, that is pretty lucky. His favourite hobby is his job.”

As a youngster, Bowie began reading daily newspapers about public affairs, and then took journalism at Kings.

Bowie’s focus is always on the voter, Movat says. “It’s very valuable for someone like Chad, who is constantly thinking about the voter, the average Canadian, the average Nova Scotian.”

“Chad has a great attitude which makes him invaluable in a campaign war room. He has a great mind and maturity for such a young guy, he’s going places.”

Possessed with an affable personality, still he is known for having a no-nonsense approach to politics, developing hard-hitting messages that drive a stark contrast between Tory contenders and their opponents.

He is known to get moody or even cranky during a campaign, with his single focus on getting his candidates elected. A hard-hitting approach to winning means leaving it all on the ice and not shying away from a dog fight.

“Elections are wars fought on a battlefield and the outcomes is very important,” he reportedly has told his peers.

As a fierce partisan, he likes to take calculated risks —a big risk for big rewards.

He is direct with his candidates, not sugar-coating the message or being a yes guy, instead telling candidates they are losing because they are not knocking on enough doors, or not taking a stand on tough issues.

His philosophy can be summed up as: “At the end of the day, it’s always about getting the votes in the ballot box.”