Over the Thanksgiving weekend, while giving thanks to my sobriety efforts, and thankful of each and every single Notebook subscriber, I took the time to do what I love doing – talking to political junkies here, there and everywhere.

Working the political phone lines, I am able to tell you who former Nova Scotia Premier John Buchanan is voting for in the Oct. 27th NS PC leadership contest. 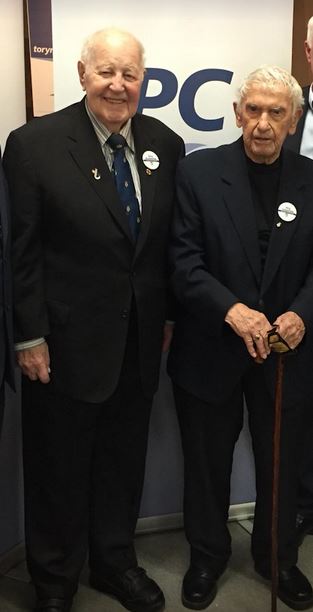 Former Tory premier John Buchanan and Roger Bacon. Buchanan shown here in the spring says he has a preferred candidate for leadership: “The winner”.

The former 1978-1992 Tory premier, now 87, is not publicly endorsing any particular candidate – because he is a Tory elder statesman.

In June, when I spoke to Buchanan, he told me then he had picked a leadership candidate.

But, now The Notebook can reveal Buchanan is going to vote for Cape Bretoner Cecil Clarke.

I now know this to be a bona fide fact, having worked political sources over the Holiday weekend.

Buchanan is originally from Cape Breton – he was once a newspaper boy. But, now he lives in Spryfield, where he has occupied his home for the last 50-years.

The former Progressive Conservative premier is the definitive Mr. Tory Royalty, who won four historic back-to-back majority governments between 1978 and 1992.

When I spoke to Buchanan last June, I had to ask him the obvious political question: Did he have trouble saying no to Nova Scotia voters during his long 13-year political regime.

With some laughter, he quipped to The Notebook: “Yes. I am going to be honest with you.”

“On his birthday, when he turned 85 years old, I was a special guest at his birthday party at his home in the south end of Halifax, and I presented him with a government certificate, and when I finished speaking he said, ‘Oh, I am glad you finished talking. You have two problems in your political life’.

“I asked him what was that doctor? He said, ‘You talk too much when you are making speeches and you never had the ability to say no.” 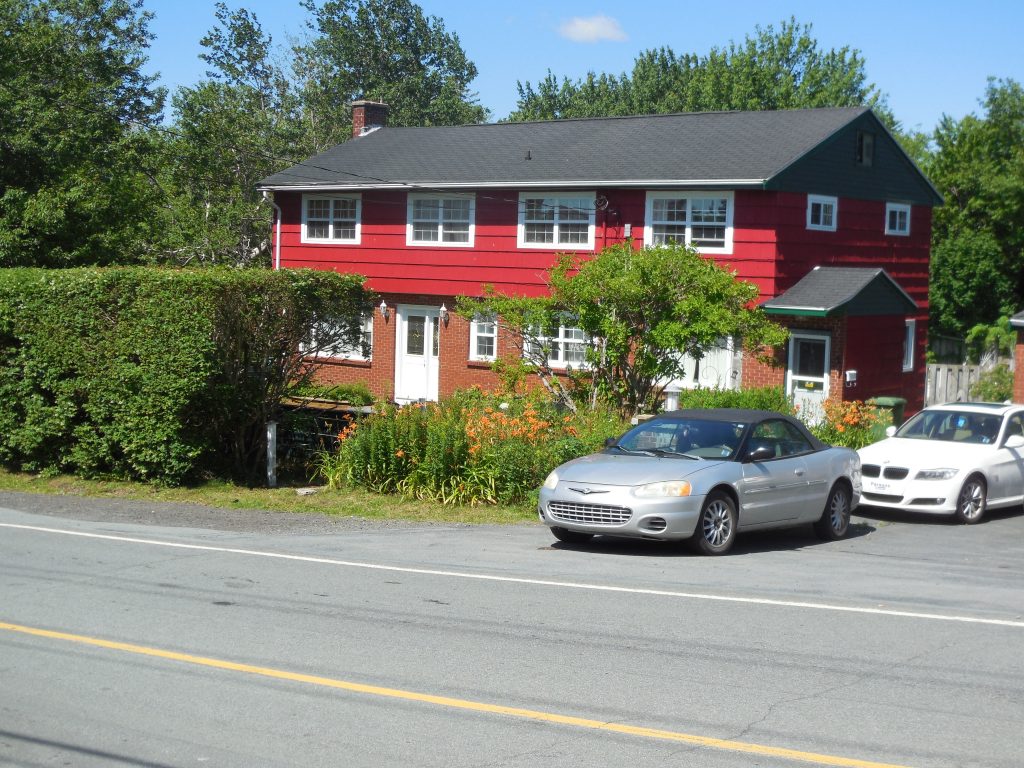 Former four-term premier John Buchanan is a lifelong resident of Spryfield. He and wife Mavis have lived in Spryfield since 1958. Frank magazine is fond of calling Mavis, the Princess of Spryfield.

Buchanan is defensive about that figure, suggesting media of the day inflated the total. He tells me he has financial papers at home showing the debt only grew to $4.5 billion during his 13 years as premier.

In fairness to Buchanan, other premiers in other provinces during the same period also racked up significant debts.

“Let me tell you something, you better check your facts. When I left office in 1992, the debt of Nova Scotia was $4.5 billion. The media guys built it up and up, but it was never any $10 to $12-billion, not anything close to it. I have all the documents from the finance department.”

The Buchanan era was a real golden age for Nova Scotia road builders, however, because the annual road building pot would top $100 million.

Prior to 1978, Nova Scotia contractors routinely bid on work in New Brunswick and Prince Edward Island.

But, with the arrival of Buchanan as premier, the road builders were able to concentrate on only Nova Scotia work, something road crews enjoyed because they were often closer to their homes.

The media of the day were critical of Buchanan’s road building largess, and when Buchanan built a road through the wilderness of Liscombe Game Sanctuary to connect Stellarton to Sheet Harbour, journalists during that era dubbed it ‘The Highway to Nowhere’.

I worked in 1988 on that road construction, and I was a teenager in charge of weighing the dump trucks, in Lorne – the ancestral home of Elmer & Peter MacKay.

Buchanan’s annual road building pot of $100 million in 1988 was followed by Liberal premier Russell MacLellan who spent only $39 million on new roads.

Today, the Liberal highways department has a robust $300 million road budget, largely because of the twinning programs the McNeil government is undertaking.

Buchanan always had a seat at the head table each January when contractors gathered for their annual Nova Scotia Road Builders gala, long held at the Westin Nova Scotian Hotel.

“I knew all the road builders. I never missed one of their big banquets in Halifax,” recalls Buchanan.

“We built more damn roads during the 13 years I was premier than any other premier before or after me.”

There are now 42 hospitals and health clinics in Nova Scotia, including in small communities, largely because they were built during the significant spending spree heydays of the Buchanan regime.

Buchanan has a long winning streak at the polls, making him the envy of most other politicos. He began political Tory work in 1963 and then ran for office and won in 1967.

“I won eight elections in Halifax Atlantic. I won four big majority governments and I was the third longest-serving premier in the history of Nova Scotia,” he proudly recalls.

“We tried in six elections to defeat Bill Gillis. We could never do it,” recalls Buchanan now.

Gillis was a major thorn and nemesis for Buchanan, who ensured there was no paving of any kind for Antigonish over the 13 years of his government since they continued to send a Liberal to Halifax.

It was a total riding freeze out.

Gillis, who owned his Antigonish seat for 30 years, retired from politics in 1998 and is now dead.

Buchanan explains to The Macdonald Notebook why he could never get rid of Gillis at the polls because he says Gillis was a people politician who attended every wake, funeral, and wedding of his constituents, and who sent out cards in the mail for graduations, new babies and other life milestones.

Buchanan says he got to work closely with Gillis’s son Dr. John Gillis, when Buchanan as a lawyer would send automobile accident victims to see Dr. Gillis at Dartmouth General Hospital, where he specializes in pain medicine.

Dr. Gillis is current president of the Nova Scotia Liberal Party, and a household name in these parts for his medical show on Eastlink, and regular appearances on Rick Howe’s Rogers Radio show.

Buchanan was dubbed by media of the day as Teflon John because political scandals could never do him down in the eyes of the electorate.

He is still the consummate peoples’ politician, with an uncanny ability to recall every face and name of voters he has met over his eight decades on earth.

He is also still active on the campaign trail. In the spring, he drove to Cumberland South to press the flesh for Tory challenger Tory Rushton, who won the by-election in June.

Buchanan says Tory Rushton is suitably named and he pointed out the PC candidate comes from a long lineage of Tory politicians.

“I’ll go to any party event they ask me to go to, but the reason I went to Springhill (in June), I was so happy to go because of Tory Rushton—what a name. They named him Tory because his mother’s father was George Hanley, who of course was in the legislature with me in 1967 and he was there in ’63, and he was in my cabinet for many years until he retired and didn’t run in the 1988 election.”

Buchanan always looked the voters in the eye and offered a firm handshake.

He also had a habit of glancing into the TV camera, when the normal practice is to look the reporter in the eye; his style meant he was also looking the voter in the eye on television newscasts, connecting with voters in their living rooms.

“A good politician must be a people person. You must be able to walk in the room of 100 people, shake hands with them. Don’t be phony. If you know them, tell them so, if you don’t, ask their names.

“I’ve seen too many politicians walk into a room, and they’d say, ‘You know me’ and the politician says, ‘Oh certainly’. Then the voter says ‘What is my name’ and he wouldn’t know the person’s name. That is a no-no. If you don’t know their name, ask them, if you do know their name, tell them because if you’re a people person who can’t sound phony.”

Buchanan has had some recent bouts of cancer, “as any man in their 80s do. I’ve had a few other little problems, but other than that I am still on my two feet, and I still go to meetings. I go to the casino from time to time with my wife, and I go to luncheons and dinners. You know, keep on the go.”

Buchanan has never written about his tenure as premier – so the only book that remains to chronicle his 13-year rule, is the rather scathing account Bagman, in which Don Ripley recounted some of the scandals during the Buchanan years.

In 1988, the Buchanan Tories were scandal-plagued and tired, but Buchanan ran in that election incredibly re-branding his government as the New PCs and remarkably won his fourth majority mandate.

“My god, people are after me all the time to write a book. I have at least over 1,000 pictures which could go into a book. It would have to be a thick book to publish all the pictures,” he says.

“Where else in life could you meet presidents of the United States, prime ministers of Canada, all the members of the Royal family, who we entertained here in Halifax, and foreign dignitaries. There is no other profession where you can do all that,” he says.

Buchanan came to his education in Nova Scotia public affairs at an early age. In 1944 in Cape Breton, he was a Sydney Post paperboy.

In 1978, Nova Scotia Power rates were sky-rocketing, and Buchanan used that issue to defeat the two-term Liberal government of Gerry Regan.

I asked the popular former premier to explain what current two-term Liberal premier Stephen McNeil needs to do in order to win a third term since McNeil vows he will run again in three years time.

Buchanan replied in our June chat: “I will make one comment. Look after the people. Be a people person as far as being a politician, and I am going to put it this way, be a Progressive Conservative as I always was with (policies).”

Buchanan says he practiced the Progressive Conservative definition to formulate government policy with an explanation given to him and once espoused by former Tory prime minister John Diefenbaker—‘Dief The Chief’.

“I asked John Diefenbaker once, ‘what the dickens is a Progressive Conservative? When I ran for office in 1967 I had no idea what a PC was then,” recalls Buchanan.

“He said because you have to be ‘progressive’ and change with changing times, and always be sure to look after the people as far as social services are concerned—education and health.

“He said as far as the ‘conservative’ side, you also have to be conservative, save the money of the taxpayers and look after the economy—and then you are (in power) for a good time as a ‘progressive conservative’.

Buchanan would later become a controversial GST senator appointed by Tory Brian Mulroney, a call he accepted to go to the Red Chamber, appointed solely to shepherd the then-hated consumer tax through Parliament.

Nova Scotia Liberal senators like Antigonish’s John B. Stewart, a former St. Francis Xavier University political science professor, did all within their power to torpedo the tax.

But, privately, Stewart told me once the Mulroney-designed GST was a pure brilliant policy move, bound to significantly grow Ottawa’s coffers.

When the Chretien Liberals took power in 1993, they kept the tax they said they’d abolish during their stint in Opposition.