Lunch With Alison: Give Us Your Lunch Money

On April Fools Day, Julien’s Bakery celebrated its 31st anniversary and owner Laura Mulrooney rolled out a freshly created Facebook page ‘Give us your lunch money’.

When you hit the ‘About” tab, the page says: “We’re delivering sandwiches to local shelters & soup kitchens in HRM, & we need your help! Please #giveusyourlunchmoney! … Your contributions help local food producers & hungry clients.”

Mulrooney took my call earlier this week. She told me that the idea started when her brother Adam Mulrooney was sent home from his new job in a stunning new office at the Nova Center to self-isolate in his Tantallon bedroom. He suggested that he would send her his lunch and parking money and Julien’s could bake bread for the food bank.

After the conversation with her brother, Laura gave his suggestion some thought and talked to others which led to her contacting Souls Harbour and Adsum House for Women and Children and learned that food preparation had been severely impacted because of Covid-19 food guidelines.

As an example, Mulrooney explains, everything suddenly had to be individually wrapped. Clients could no longer be served yogurt out of one large container. “That’s a lot of pressure on the organization.”

Because of this, Mulroney reached out to Moriah Lutley, the manager at Chester’s Cafe and her husband Matthew, as well as Steve Maly, owner of The Other Bean Sandwich Shop on Quinpool Road whose kitchens were also dealing with new and constraining C-19 rules and engaged them in the idea of the Give us your lunch money project. 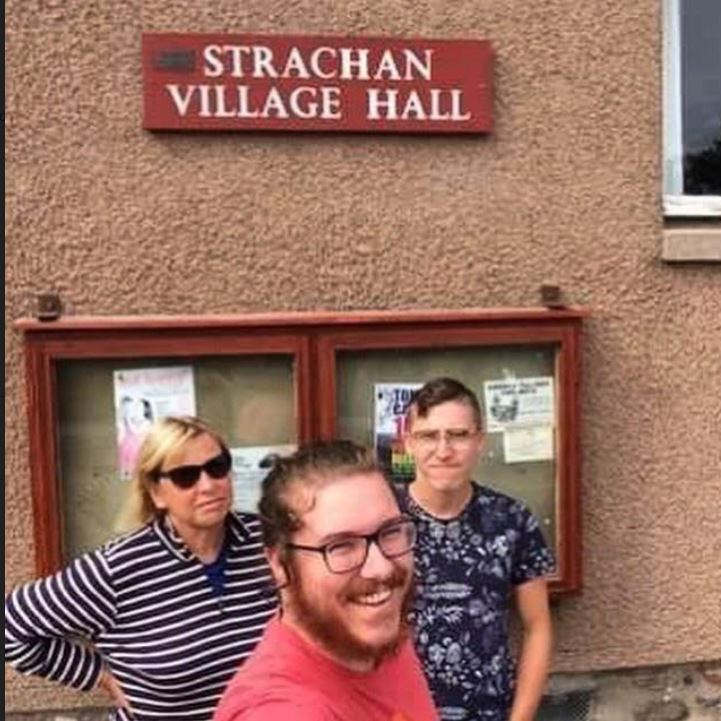 Alison Strachan and sons visited the village of Strachan in Scotland in 2018.

As Moriah Lutley later explained it to me, “I think that normally places like Souls Harbour would take donations from the general public and because of Covid-19 they had to stop doing that. We can produce food in an approved food kitchen. The pandemic really cut down their options in getting food in. Everything has to be done individually because of worries of cross-contamination. Everything has to be individually packaged and this drives up the cost per person to feed their clients.”

Steve Maly tells me that when Laura Mulrooney, who he has been buying bread from for the six years he has owned and operated his sandwich shop, first approached him, he thought, “yeah that makes perfect sense.” It was the beginning of the lockdown and he was unsure of what form farmers markets would take as time went on, but he assumed the market supply chain was under threat. 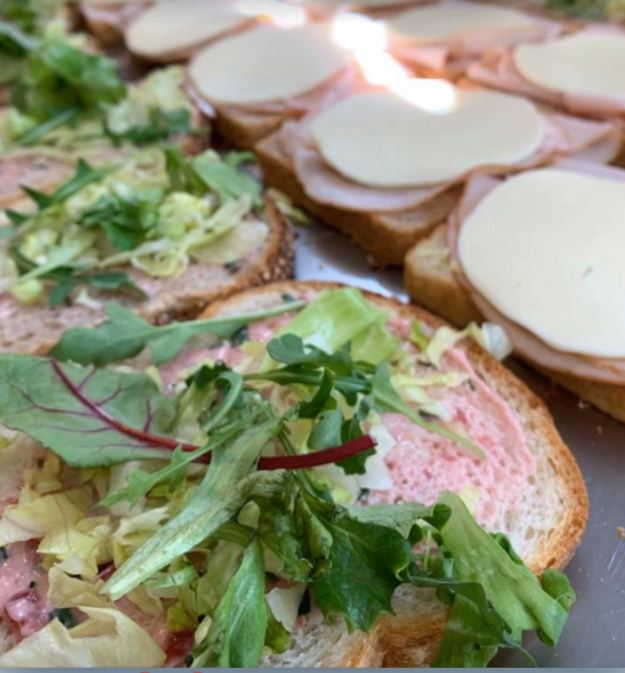 Mulrooney says that once Give me your lunch money was profiled more, donations started opening up more options such as providing local “shoots and sprouts”, and sweets that are “luxurious, but who doesn’t want a treat.” On the day we spoke, Julien’s was baking ginger cookies to go with an upcoming sandwich delivery.

Cooking also takes place at the Brunswick St. Mission where three meals a day are prepared for pop-up structures.

On Saturday, Mulrooney herself takes 100 sandwiches to St. George’s Round Church where Soup Kitchen has been in operation for more than 40 years. Soup Kitchen is near to Mulrooney’s heart – her father was involved with it too over the years.

Sandwiches are also delivered to Bryony House during the week. 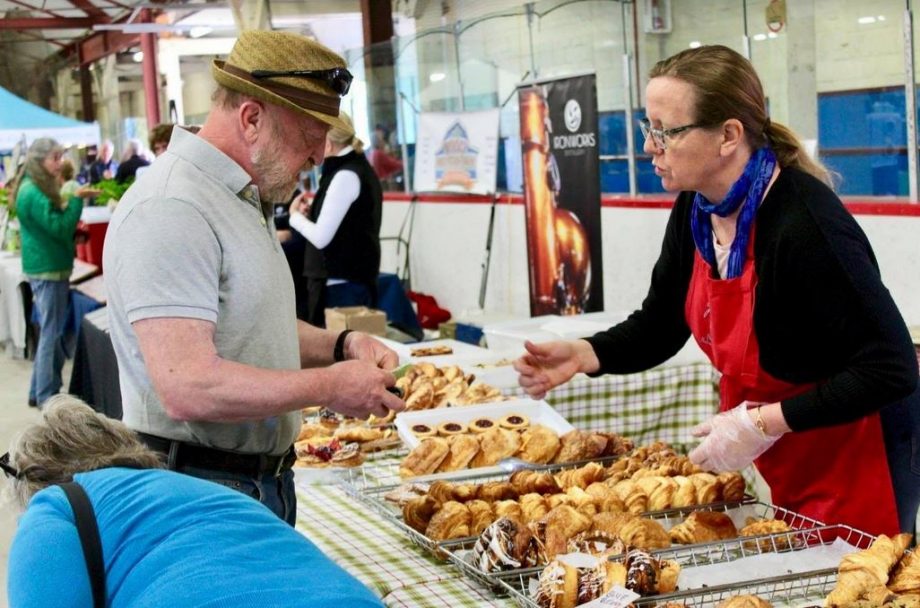 Laura Mulrooney of Julien’s Bakery assists a customer before pandemic times at the Lunenburg Farmer’s Market. Photo by Jennifer Naugler.

Since April 1, approximately 1,000 sandwiches have made their way into hungry mouths at a cost Mulrooney estimates as $3 each. All of this is done at no cost to the non-profit host organizations through donations to #giveusyourlunchmoney.

I asked Mulrooney what the most important part of the story is for her and she enthusiastically jumped in with a number of important parts. She says that spending money with Nova Scotia’s farmers’ market vendors and keeping some of those businesses and employees working is an important part but so is also partnering with different organizations. Her example was the flattening of sales of Girl Guide cookies due to COVID-19 restrictions and how the Give us your lunch money project was able to purchase some of those cookies and distribute them.

Mindful of what she calls “serial donors,” Mulrooney adds that regular market-goers who she has forged relationships with over the years have also risen to the challenge by making donations, even one to her mailbox the day we spoke!

Another partnership she points to is one with Taproot Farms which recently shared on Facebook that they would be delivering produce boxes to “anyone who self identifies as hungry, isolated and lives near the farm.” Julien’s now includes a loaf of bread in each box. 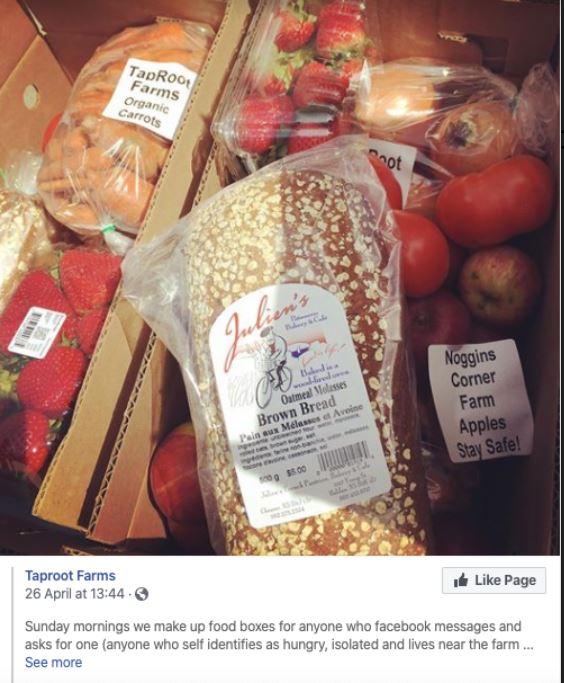 Taproot Farms food boxes for the hungry and isolated

Mulrooney is supplying Julien’s regular farmers’ market customers with deliveries of bread every second Friday. Deliveries are at Exits 9 and 7 and Martin’s Point and East Chester.

Beginning this Friday, Julien’s will be doing deliveries to the Tantallon farmers’ market site.

Customers have also been donating $5 or more on top of the delivery cost of the bread to Give us your lunch money. Just last week, Julien’s raised just over $500 in donations on bread delivery donations.

I asked Mulrooney what is the key takeaway for her that might stay with her once on the other side of the pandemic and she replied that she, “already knew that people are pretty darn good, but just that sometimes they need to be guided.” She says she wanted to bring partners to make it work more efficiently. She points to the pandemic bringing partnerships together effectively.

Lutley responded to the takeaway question quickly. “Honestly, I had no idea that there was a Souls Harbour in Bridgewater.”

Lutley shared that Chester’s Cafe had come to an almost grinding halt with the State of Emergency declaration and its restaurant rules. For a business that had only been off the ground for almost seven months, this was tough for Lutley.

She says she first strived to work now with “to do” lists and details and small projects that needed to be done, but once they were, the weeks started dragging and it became hard to set goals. When Mulrooney called to involve her, it gave her more goals to hit and fulfilled her need to be on a “rolling productive train”.

Reflecting, Lutley says that once the Cafe reopens, although she can’t commit to precisely how or what just yet, she likes the idea to in some way “keep a train rolling” with Bridgewater Souls Harbour.

What is Lutley personally thinking about ‘hanging onto’ from the pandemic?:

“I feel like I never had enough time to relax before, to read a book, but I think going forward I will definitely do all I can to hold onto that ‘time’ I’ve been forced to fall into during the pandemic.”

Maly says that C-19 was met unsurprisingly with innovative ideas and adaptations in the community. He points to a number of businesses pitching in to help both the community and at the same time keep staff working throughout the pandemic. For example, he says his neighbours at Aerobics First have introduced a “virtual fit while closed” and this has allowed Luke MacDonald, a “guy who is always ready to pitch in” help the community as well as to keep staff working.

For Maly, C-19 has taught him that “speed is of the essence” when adapting to sudden and unexpected changes to the business. He switched quickly and managed to run a business through this. He says he’s always “been trying to figure out ways to use the business to power social enterprises. Maybe there is a structure to continue with a fundraising option” on an ongoing basis.

He says Mulrooney, Lutley, and himself had never tried to start a not-for-profit, and when they had to look around so quickly to figure it out, no one seems to be out there that had started from ground zero. This is something he will continue to explore and talk to people about.

The Other Bean has also been running a fundraiser collectively with Unfiltered Brewing on North Street and Earl’s Signature Hot Sauce. On Friday nights, $25 meals are delivered to customer’s doors by a volunteer driver, and $10 from each meal goes to a non-profit. So far, this has included Marley’s Hope and Bide-a-While. For Maly, he’s now convinced more than before that he can go forward with a business that has a social conscience.

By the way, Adam Mulrooney continues to donate his lunch money.

My takeaway? This project confirms for me the successful power of strong mentorship, led by the founder of a 31-year-old beloved Nova Scotia bakery and two new entrepreneurs ready, willing, and able to brainstorm and implement a novel solution to a novel virus. Furthermore, they did the right thing.

For more Lunch With Alison columns see The Macdonald Notebook, news archives, or simply click here to be taken to these columns by Alison Strachan .

For more Chester Chatter columns, they are also in The Macdonald Notebook archives, or simply click here to more Chester news columns.