The other week I featured a story on Port Hawkesbury’s 97-year-old J. Franklin Wright who, while he might not enjoy a household name in Nova Scotia does have name recognition among most discerning art collectors around the globe.

Wright has been described as the foremost marine artist in this century, and even the last century.

The other day, I went on a Notebook news assignment to the gallery that has, since 1998, served as the official agent to Wright. At Antigonish’s Down to Earth Art Gallery & Frame Shoppe I met the proprietors, Elaine Rhynold and Gerard Mason, a married couple who opened the gallery in 1996.

J. Franklin Wright’s official bio notes he has long been acknowledged as one of the most accomplished Canadian marine artists of this time. A native of Point Tupper, which since the 1960s has been an industrial park, he had a bird’s eye as a youngster of vessels plying the Strait of Canso, and Port Hawkesbury harbour.

“He is influential for his explorations into the sparsely documented history of our shipbuilding industry,” his bio states. 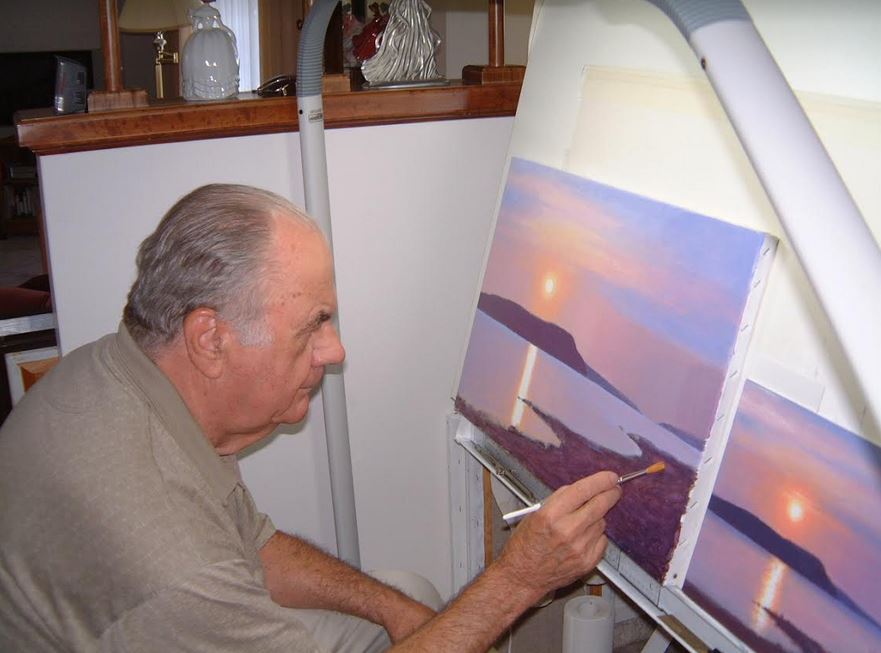 J. Franklin Wright is considered one of Canada’s foremost marine artists. He is from Port Hawkesbury.

While legendary artists Jack Gray and Joe Purcell on Nova Scotia’s South Shore’s portrayed a romantic view of the Grand Bank schooners, Wright would take a historical approach, even studying the ship’s blueprints to capture an accurate historical perspective for his paintings, says Rhynold and Mason.

Wright received formal lessons in design and composition and was strongly influenced by the Dutch and British marine painters to whom he is so often compared, notes his bio. His paintings reflect a strong pictorial organization, attention to detail, and naturalistic colouring.

“He has been called a “master of sea and sky,” adds the bio.

Private collector John Bragg owns a painting by Wright, as do such organizations and corporations as The Maritime Museum of The Atlantic, Texaco, Marine Atlantic, the province of Nova Scotia, Sobeys, the Canadian Coast Guard, Baxter Dairies, Stora, Gulf Oil and Husky Oil.

Other collectors live across Canada, the United States and the United Kingdom.

During his art career, Wright also did many commissions, including for the Royal Canadian Mint, where he went about work designing the limited edition $20 sterling silver coin in the year 2000. He also in 2001 did a painting of the Marco ship for the $20 sterling coin for the Mint.

The ship Marco was also commissioned by Canada Post, in 1999 for the then 46-cent stamp. In 2010, Canada Post also used Wright’s painting of HMCS Niobe as it entered Halifax Harbour in 1910 for the  57 cent stamp.

Wright was largely self-taught and spent an adult career working on passenger trains, based out of Inverness. When the trains were abandoned, he was offered a relocation away from his beloved Cape Breton. At that point in 1970, his wife, Louise, who died 14 years ago, put her foot down and instructed her husband that his new career would become art. 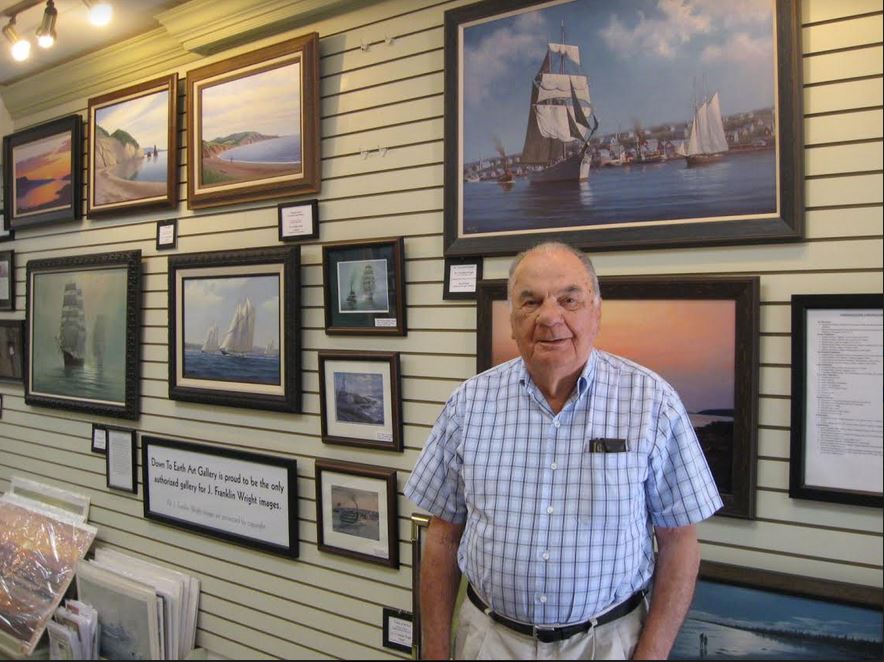 J. Franklin Wright at Antigonish’s Down To Earth Gallery, which is his exclusive gallery.

While largely self-taught, Wright did receive instruction in composition and painting techniques from the Famous Artists Schools, based in Westport, Connecticut, taking those lessons from 1967-71, point out Rhynold and Mason.

In 1990, Wright published a book of many of his artistic works, entitled The Marine Art of J. Franklin Wright. That charming book can still be found at some used book stores in Halifax.

Wright often did commission work for clients and while in his later life he would do landscape scenes of his beloved Cape Breton, most of his art career, which really took off in 1970 when he retired from working passenger trains, has been on marine subjects. 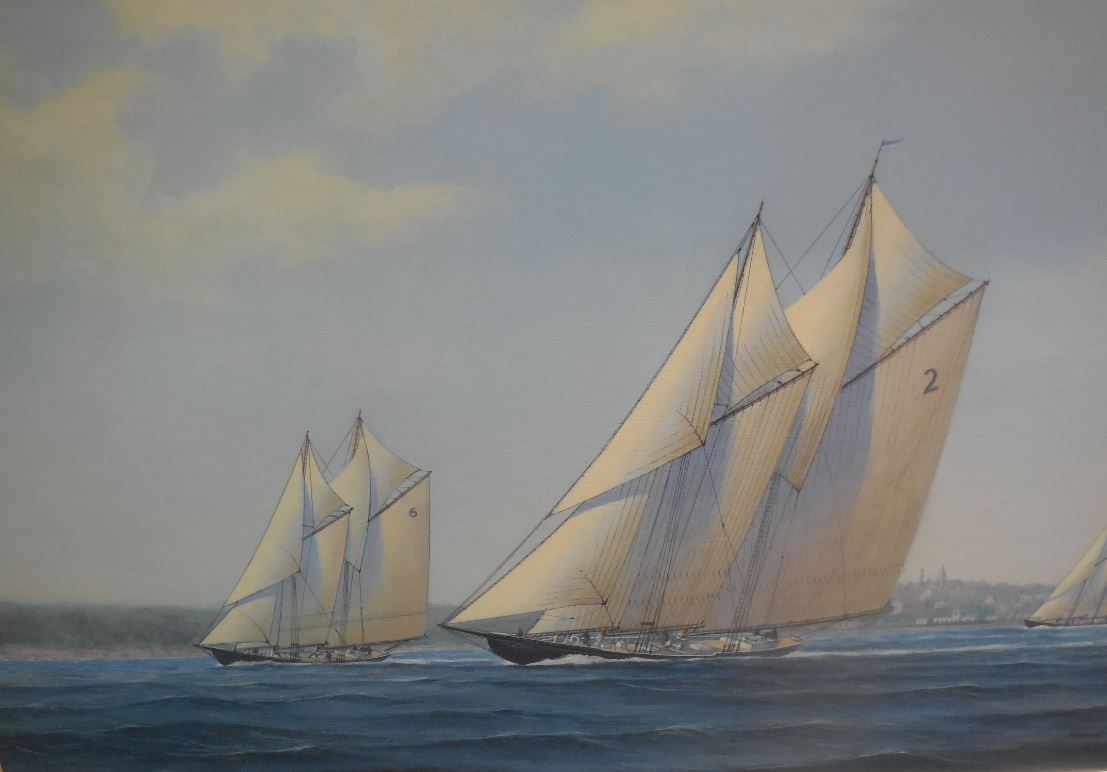 “The primary focus of his work (was) on the portraits of historic vessels that have earned J. Franklin Wright international acclaim,” gallery co-owners Rhynold and Mason tell The Notebook.

In the 1990 book featuring Wright’s work, authored by Jean Wright-Popescul, and which the artist, born in 1924, dedicated to his wife Louise, the foreword was written by Donald S. Macdonald, later a High Commissioner, based at Macdonald House, in London, England.

MacDonald, who was 1970s cabinet minister in the government of Pierre Trudeau, acquired two originals from Wright in 1978 and again in 1982.

“The extent to which Canada’s shipbuilding and seafaring heritage has contributed to our status as a nation today can never be underestimated’, wrote Macdonald. “My own family was very much a part of this exciting tradition. My grandfather, Angus Macdonald, from Antigonish, went to sea around his 15th birthday, and took his master’s ticket in Halifax in the 1870s,” said Macdonald. 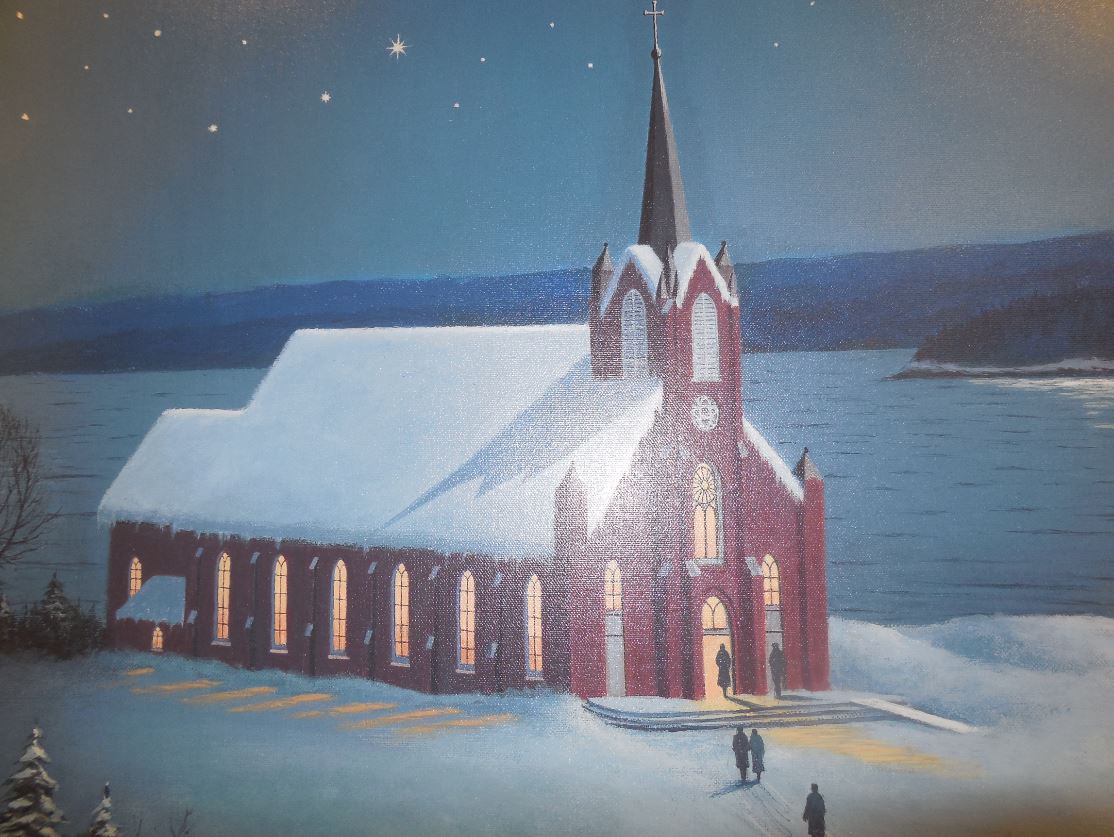 Macdonald commissioned Wright to paint two renderings of his grandfather’s vessel, ‘Canara’, painting it under full sail, and the second painting with the ship approaching Halifax Harbour.

“Wright’s meticulous attention to the architectural and historical detail necessary to portray these fine vessels authentically, combined with superb skill as a painter, renders each of his works a legacy in the tradition of the old Dutch masters,” wrote Macdonald.

The 1970s-80s politico, added in the book’s foreword: “Of particular interest is the wondrously aesthetic depiction of ships in every variety of sky and water.

“Wright’s enrichment of contemporary traditional art (and indeed our heritage) has established him as one of the most revered artists in Canada.”

In his foreword, Macdonald rightly predicted the 1990 book would become a collector’s item, given service “as the quintessential retrospective of J. Franklin Wright’s art.”

In the book’s preface, an author who gives his name with the initials J.W. P., states Wright is “internationally recognized for his detailed paintings from the “great age of sail.” 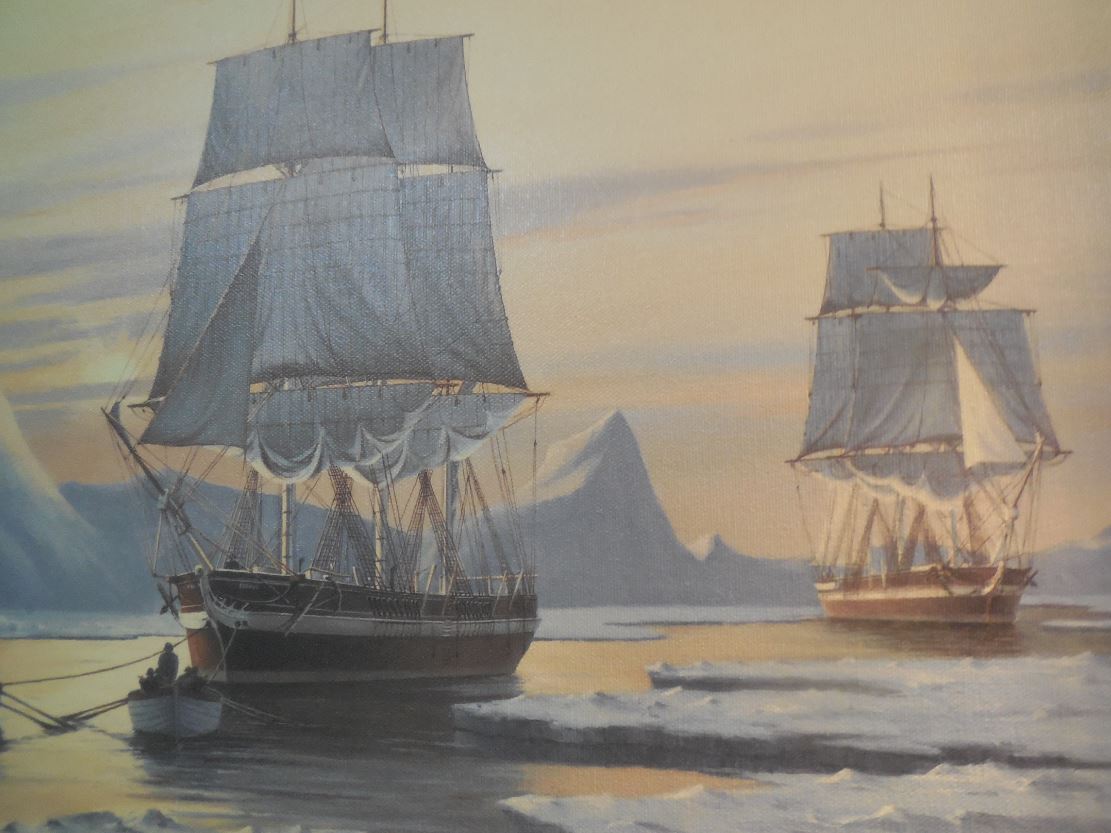 He wrote that the Age of Sail, with its wooden-hulled Maritime merchant sailing vessels, and the saltbankers and three-and-four masted schooners became the focus of a life-long study for Wright.

The book’s preface also states: “The splendid vessels that once distinguished the many harbours and coves along the Atlantic coast have now almost completely disappeared, but the pioneering work of J. Franklin Wright re-defines that era, capturing the spirit of an age in maritime achievement which is one of the most inspiring in Canadian history.”

J.W.P. also writes: “The marine paintings created by J. Franklin Wright…make a vital contribution to our understanding of an important era in nautical history that stretches from the early settlement of Canada to the defence of a nation in two World Wars.”