In 1990, Port Hawkesbury marine artist J. Franklin Wright produced a book displaying some of his paintings created from 1990 to 1970. Now found in leading used book stores in Halifax, Wright’s son, then living in Saint John, wrote the book’s introduction

The son now lives in Port Hawkesbury with his dad, who is now 97. They reside on the same street as long-running politico Billy Joe MacLean.

Following is Edwin Wright’s introduction in 1990 to the book and it is worthy of a read, as a son reflects on the artistic talents of a father:

Antigonish’s Down to Earth Art Gallery is the exclusive dealer of artwork by J. Franklin Wright.

It would appear that my father’s art serves the latter purpose in that it celebrates the magnificent ships of the past as well as their builders and sailors.

But whether we are contemplating an aspect of life, we must ultimately ask ourselves: In what manner does art portray reality and in what manner do artists impose their particular perceptions of reality on the external world? I think, to some degree at least, the answer to this twofold question lies in the esoteric realm of the aesthetic and the archetype. 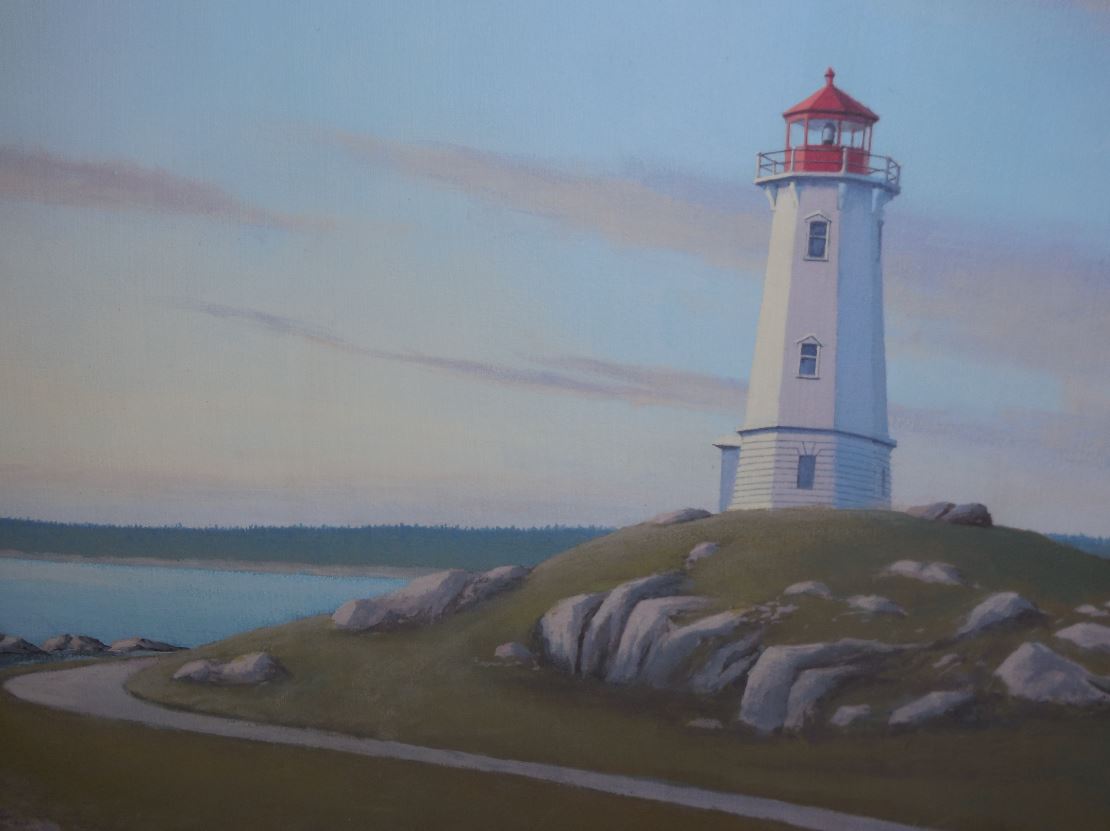 The Louisbourg Lighthouse by J. Franklin Wright. The original painting is for sale at Down To Earth art Gallery for$14,500. Lease to own for six monthly payments of $360.22.

In my opinion, the artist is essentially free in utilizing the medium to create a work that reflects the aesthetic values of his time and culture. But that which is aesthetically pleasing in one particular time and culture may very well-tread upon the tender sensibilities of another.

And so, the artist’s freedom is necessarily tempered by the natural world, primarily through the archetype. And it seems that the degree fo widespread appeal for a particular work is tantamount to the success with which the artist has met in struggling to harmonize the aesthetic with the much deeper archetypal law.

I have observed this struggle in my father’s work. As a painter, he has fought with form, light, colour, and composition, as well as with inherently limited historical data, to render artifacts from a past era visible to the modern world. 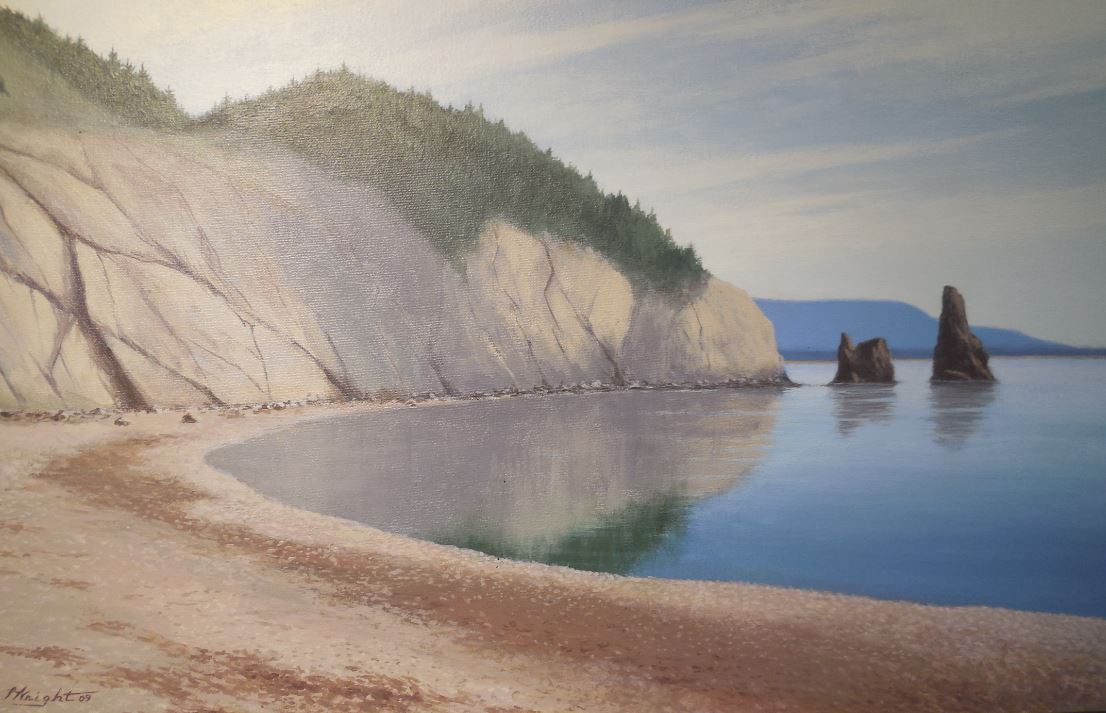 An original by J. Franklin Wright, entitled Pres’Quille, Nova Scotia for sale at Down To Earth Art Gallery for $14,000.

His paintings are referred to as ‘representational’ art, an art form whereby the artist attempts to portray physical reality as perceived through the process of vision.

In portraying three-dimensional physical reality onto a two-dimensional canvas, the artist must employ the techniques of perspective, highlight, shadow, and gradient; he must continually be on his guard against any tendencies toward illusion and misrepresentation.

My father’s meticulous portraiture of old sailing ships has necessitated his mastery of the technical details of their design, construction, and performance under varying circumstances of weather, sea state, and utility. Each ship portrait, particularly when composed under the exigencies of a commission, is a special challenge in establishing technical accuracy and in depicting the vessel in a manner conducive to his client’s requirements. 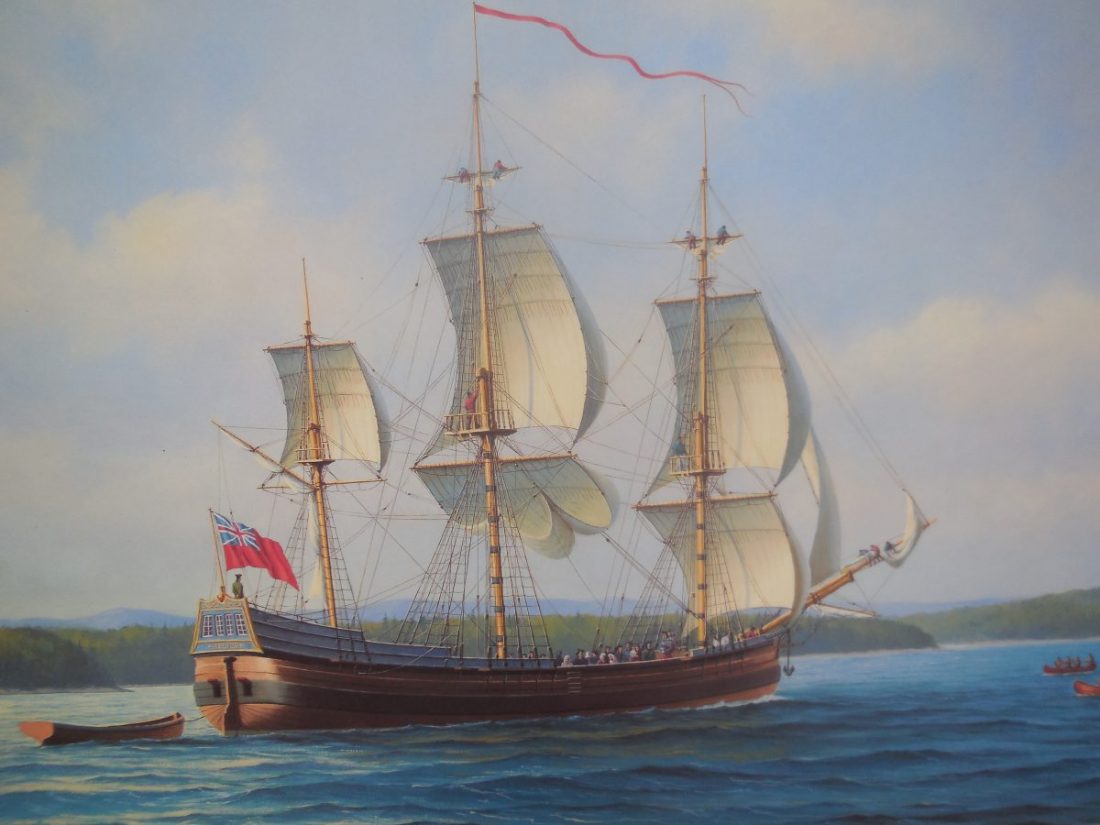 As a marine artist, J. Franklin Wright is continuing a tradition that began with the arrival of the great Dutch marine artists, the van de Veldes, in England during the 17th century.

After reaching its pinnacle in the late 19th century, marine art became overshadowed by a myriad of other art forms for the next half-century, until its revival in the early 1960s.

Today, in Canada, J. Franklin Wright is at the helm of that revival.