As I chronicled in the above news article, Antigonish’s Down to Earth Art Gallery & Frame Shoppe has been the exclusive dealer for J. Franklin Wright since 1998.

Given the historic artist-gallery agency relationship, when a fine Wright marine oil painting is being sold by an original collector, Down To Earth proprietors, Elaine Rhynold & Gerard Mason tend to get the re-sale.

Such is the case with a magnificent 1986 work of art by Wright, the Port Hawkesbury resident, who is now 97.

Originally owned by a collector in Calgary, Down to Earth bought the painting, and now has it displayed at its gallery on Antigonish’s Main Street. 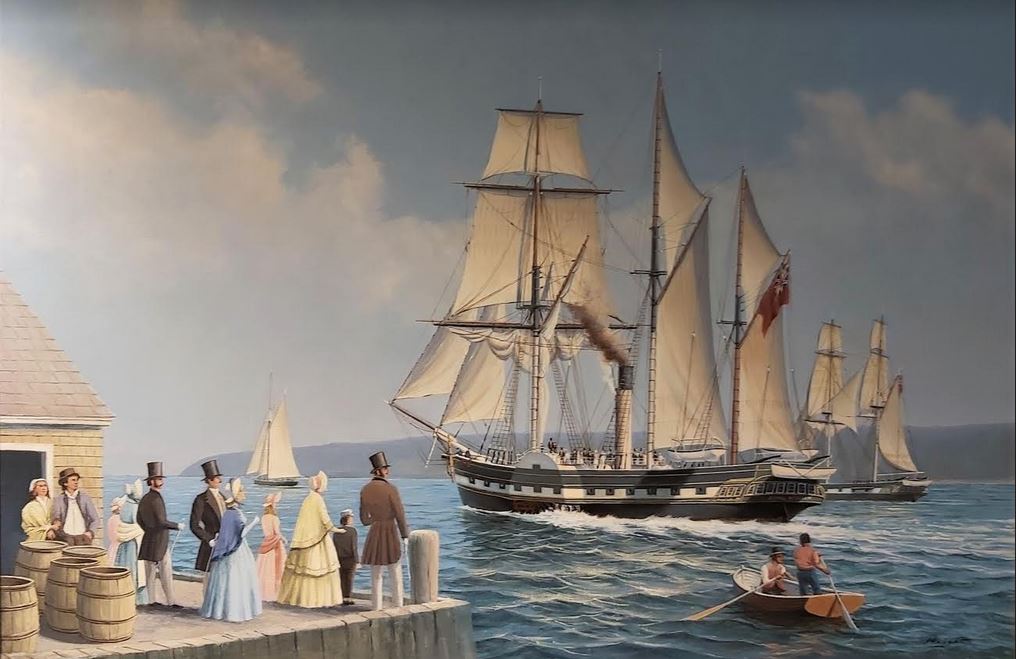 Called Royal William – Glory Bound, the painting captures an 1833 sail from Pictou Landing. It’s for sale at Antigonish’s Down to Earth Art Gallery.

But, there is also a limited edition print. Fifty prints were processed by the gallery, and each is for sale at $100.

The artist’s description of Royal William is the ship was named after England’s ‘Sailor King’, William IV. The stunning tall ship was designed by John Goudie at Black & Campbell Shipyard in Cape Cove, Quebec.

Her engines were constructed by Bennett & Henderson, of Montreal, and financed by Joseph, Henry, and Halifax’s Samuel Cunard, along with many shipbuilders in Quebec.

“No one imagined that she was destined for greatness. Built in Quebec in 1831, she was a strange vessel, a mongrel, that at first glance looked like a schooner, but amidships stood a smokestack. This was not a sailing vessel but a steamship!” says Down to Earth.

“It is August 1833 and this small vessel, only 176 feet long, and displacing less than 500 tons is leaving Pictou Landing, and is about to secure her destiny as becoming the first vessel to steam all the way across the Atlantic, and in less than a month,” says Down to Earth.

“In doing so, she ushered in a whole new era of seafaring.”

“The young Halifax businessman who invested in her, as well as many ships of the day and making a fortune for his company, was Sam Cunard of the Cunard Line.”

Question: How did Down To Earth Art Gallery become the exclusive agent for J. Franklin Wright?

Elaine Rhynold replies to The Notebook: “Down To Earth Art Gallery started out doing the custom framing for J. Franklin Wright very early on in our business, which we were flattered to have the opportunity to do. He liked how we conducted business, the customer service, quality, and direct answers to any questions.

“In 1998, Frank and his late wife, Louise, approached us about becoming the exclusive gallery for all new J. Franklin Wright originals and prints, with a few exceptions. To have an offer like that so early on in our business life from an artist of Frank’s International credibility made our Gallery. 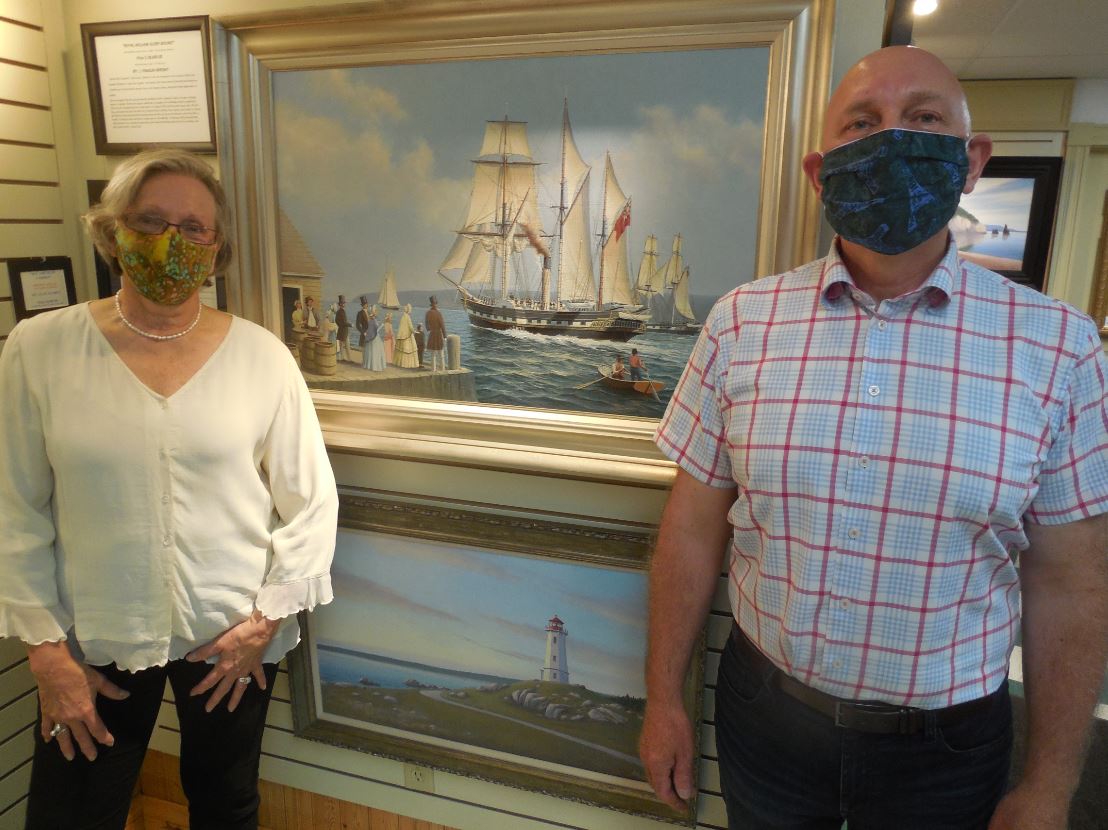 Elaine Rhynold and Gerard Mason, a couple, own Antigonish’s Down to Earth Art Gallery. Pictured is an original of Royal William by J. Franklin Wright. The lighthouse is for sale for $14,000, also by artist Wright.

“Over the years, we not only had a wonderful business relationship with Frank and Louise, but had the opportunity to become friends with many visits over homemade biscuits and jam. Frank relied heavily on Louise’s critiques of his paintings, and a strong guideline for when they were worthy of his signature.

She adds, “J. Franklin Wright is always the perfect gentleman, and we consider ourselves truly fortunate to have gotten to know him”.

Question: How would you describe J. Franklin Wright’s approach to artwork?

Elaine Rhynold replies to The Notebook: “There is a reason that J. Franklin Wright is one of the best known marine painters in the latter half of the 20th century as he depicted the great age of sail.

“His meticulously executed portraits were rendered only after careful research on all information available, including geographical settings, how the ship set in the water, and the amount of sail required of all weather conditions. So his paintings aren’t only historically correct, but technically as well.

She adds, “However his paintings are not just detailed architectural studies, they are indeed genuine works of art that manage to breathe life into an image that transports you to another time and place.

“It is obvious that Mr. Wrights’s love for the time of sail has become a part of each image that he has painted.”