I am delighted to report everyone’s favourite highway twinning crusader turned 50 on April 10 during our current pandemic.

Fire Chief Joe — whose last name is MacDonald, if you insist — is the chief of the 16-member Barney’s River Fire Department. He led the successful and valiant crusade to see the 104 HWY twinned all the way to Antigonish from the outskirts of New Glasgow.

That’s a 40-kilometre two-lane deathtrap where 21 folk have died since 2009. Fire Chief Joe attended to most of those tragic fatalities.

Even the region’s former MP, Peter MacKay, a powerful patronage king and decade-long federal minister in the Conservative government of Stephen Harper, could not get the job done in his own backyard.

But, Fire Chief Joe got the job done. 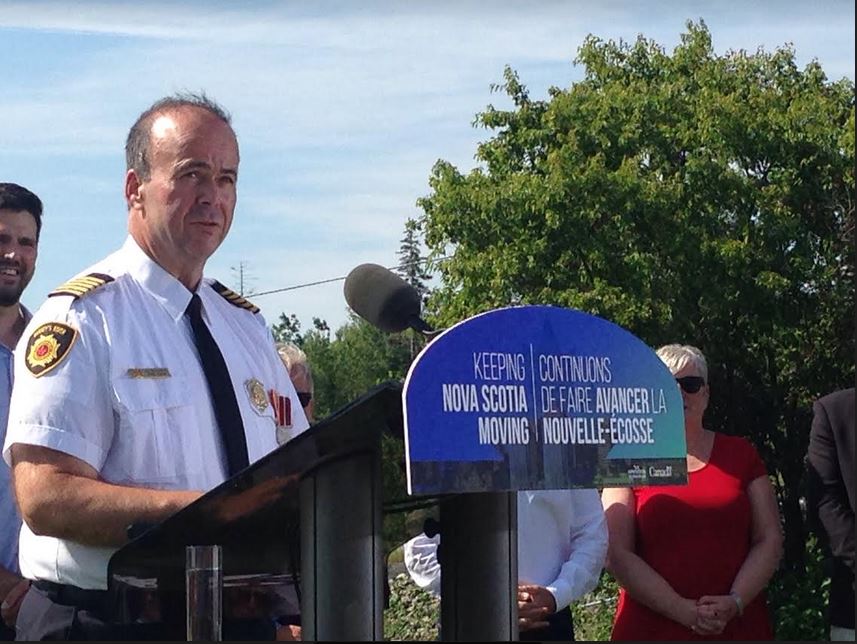 Barney’s River 104 HWY Fire Chief Joe MacDonald advocated a twinned highway to save lives since beginning his crusade in 2014. The Notebook photo.

He bugged the heck out of the Nova Scotia government of Stephen McNeil and even got 15,000 signatures on petitions demanding a toll highway.

He got a sympathetic ear from Transportation and Infrastructure Renewal Minister Lloyd Hines, who travels the highway to get back to his Guysborough home.

Hines is an old fashioned politico who believes in delivering the bacon to long politically forgotten northeastern Nova Scotia is important. Honed over a 30-year career as a municipal politico, Hines is simply addressing a wrong for the region, when you think since the 1970s fat cat Halifax has long enjoyed twinned and safe routes. 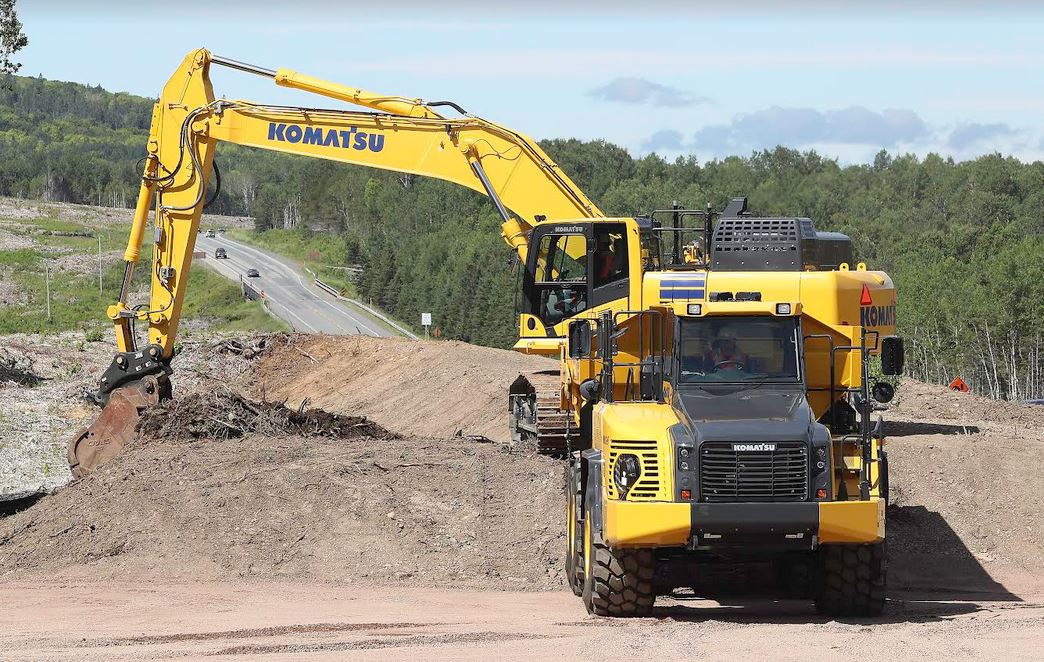 The twinning of the 104 HWY has begun, a 40-kilometre project that will open in 2023, between Antigonish-New Glasgow (Sutherland’s River). NS Gov photo.

So Hines went to Ottawa, where Scott Brison had become a minister in the new Liberal government of Justin Trudeau

Brison, an arch-enemy of Peter MacKay, obviously wanted to outdo Mackay in his own backyard so he delivered nearly $100 million towards the $365 million twinning costs for the 104, so he can put it to his political nemesis MacKay.

But, the man who made the twinning possible is Fire Chief Joe, there’s no doubt about that.

So, this is a story of Fire Chief Joe turning 50, and ‘Fifty is Nifty’, they say.

A person between 50 and 59 is called a quinquagenarian. Proving he is a good sport, not only a folk hero to the Nova Scotia motoring public, Fire Chief Joe took my questions on his milestone birthday.

2. How did you celebrate turning ‘fifty is nifty’?

3. So do you plan a larger celebration this summer?

“Nothing planned, maybe next year when hopefully things are better.”

4. How does it feel to be a half-century old?

“Not half-century yet, just first anniversary of my 49th birthday,” he jokes. “No big difference, still lots of things to do. Nova Scotia is a great place to live.”

Fire Chief Joe MacDonald, who heads up the 16-member Barney’s River Fire Brigade, turned 50 the other month. (The Notebook photo).

Fire Chief Joe’s day job is as a second-generation operator of an Irving gas station on Post Road in Antigonish. One of the popular features at the gas station is that Fire Chief Joe provides an employee to pump gas for those who don’t want to do it themselves. It is the only station in Antigonish to offer the convenience.

In Halifax, of course, that convenience is also offered at the station at the corner of Robie & Young, where Kevin pumps gas. Kevin is from Advocate Harbour, and often tells his customers how he is a second-generation gas attendant.

I forget which, but he is also a fanatic hockey fan, either of the Toronto Maple Leafs or the Montreal Canadiens. It’s one or the other. I’ve been meaning to interview Kevin, a delightful Haligonian who is known to work on his day off.

But back to Fire Chief Joe:

5. Regarding the gas station, how popular has been the service offered to have employees fill car? (I, for one, LOVE it).

“It’s popular and it provides more jobs for young adults.”

6. What is the best 50th birthday gift Fire Chief Joe you received?

“Here’s a tidbit: It’s also the second anniversary of finding out that the twinning project was going ahead. That’s one of the best presents that I ever got.”

NOTE: I found this article in the U.K. Daily Mail newspaper, published in 2010, about turning 50. It’s an interesting read:

It used to be the over-50s casting envious glances at the youngsters who seemed to be having so much fun. Now the roles have been reversed.

Fire Chief Joe MacDonald and his brother operate an Irving Gas Station in Antigonish, on Port Road. (The Notebook photo).

Researchers found that the typical ‘Nifty Fifty’ is more sociable, happy and active than someone half that age.He or she is likely to have more nights out, meet up with more friends, have more weekend breaks away and more holidays abroad.

But the typical 20-something has only one evening out per week, sees three friends and takes two short breaks.

Half of all over 50s said their focus is on enjoying life to the full, while only three in ten 20-year-olds can say the same thing.

The survey was carried out by Benenden Healthcare, a mutual society which provides for families and individuals.

A spokesman said: “The modern 50-year-old spends more time than ever on things that boost contentment in life, and with life expectancy rising all the time, being middle-aged is no longer a precursor to winding down.

“Those in their 50s are happier, socialize and explore more than those half their age and even appear fitter.

‘It’s great to think that the older generation are showing the youngsters the way when it comes to enjoying a healthier and more exciting lifestyle.”

The survey found that middle-aged respondents have at least one meal out a week, have at least three glasses of wine and exercise for nearly two hours a week. They have also holidayed abroad at least twice in the last year, taken up three times as many hobbies as someone half their age, and enjoyed three countryside walks in the last month.

By contrast, those in their 20s manage only two meals out a month, one holiday abroad a year and two glasses of wine a week.

They do just over an hour of exercise a week, have picked up only one new interest and taken only one country ramble in the last month, saying they are too tired to get out as much as they would like.

The study suggested that a fifth of over-50s are a member of a gym, and spend nearly £400 more a year on going out, alcohol and day trips.

They have also taken fewer sick days off work, go to bed later than those in their mid-20s and more than a third reckon they are healthier than they have ever been.