Iona, Bras d’ Or Lake — If you have a couple of hours to spare this summer, and want to make an unforgettable journey back to the late 1700s, head to Iona in central Cape Breton.

“We are a living history site,” director Rodney Chaisson tells The MacDonald Notebook during my recent visit.

As its website describes – highlandvillage.novascotia.ca – the outdoor museum and Gaelic folk-life centre “illustrates the story, culture and identity of Nova Scotia Gaels.”

“They saw the handwriting on the wall,” says Chaisson of the decision by many Scots in the 1700s to come here. 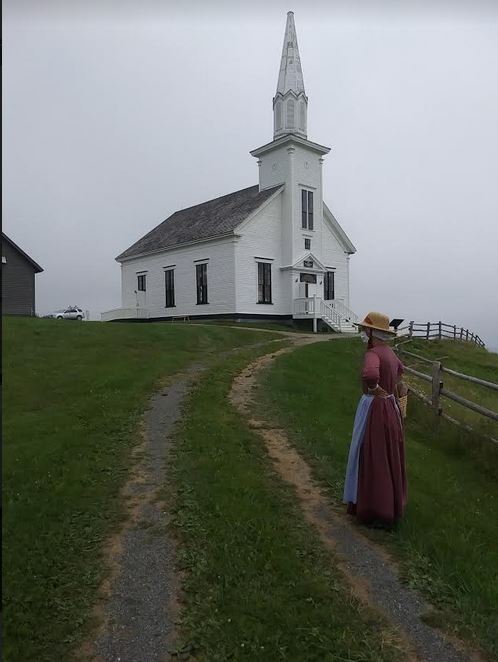 Animator Amber Buchanan makes her way up the hill to the village’s church.

The challenges they faced are explored at Highland Village – a taste of what life was like, one delivered by talented animators who ‘live’ on the property, which includes 11 historic buildings — everything from a general store to a one-room schoolhouse.

Chaisson marvels at the settlers’ resiliency and adaptability. They truly faced the unknown, leaving the lives they knew. Nevertheless, they didn’t just survive, they thrived.

The seeds for what would become the Highland Village were planted in the 1930s when a Nova Scotia delegation led by Premier Angus L. Macdonald visited the United Empire Exhibition in Scotland. While there, the group was inspired by a village model that they wanted to replicate.

In the mid-1950s, the Nova Scotia Association of Scottish Societies sponsored a competition to select the home for the planned museum. On the strength of a stellar presentation delivered in Gaelic – Iona won the selection process. 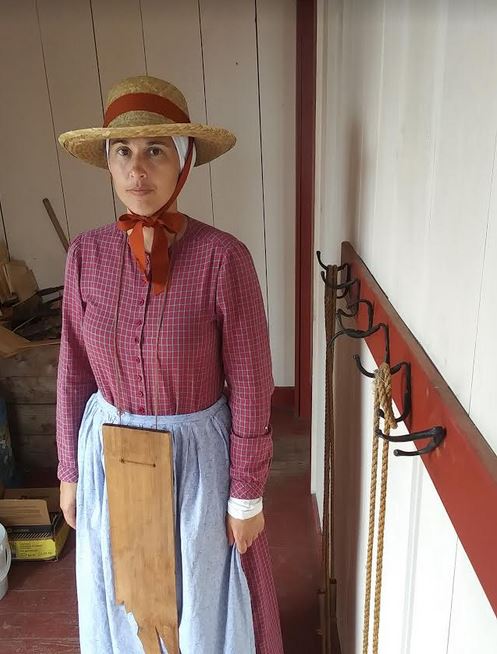 More than one year later – in November 1957 – the Highland Village Planning Committee met for the first time and incorporated. Over the following six years, the dedicated group raised money, while making plans for construction.

One of the milestones of that process came on Aug. 4, 1962, with the first Highland Village Day outdoor concert, an annual tradition that continues to fundraise and create awareness. Only the global coronavirus pandemic has interrupted that tradition. This year, supporters will have to settle for an online concert.

In the early 1970s, the society unveiled a master plan. Buildings were added and consistently improved in the 1980s and ’90s, along with the management of collections and their preservation. And, during that era, the ‘living history’ approach was adopted.

In 2000, the site joined the Nova Scotia Museum family, while significant investments – in both time and money – were made to upgrade the Roots Cape Breton Genealogy Centre, the Gaelic Language and Culture Programming, as well as the further development of interpretive programs.

After chatting with Chaisson, I was left in the capable hands of Amber Buchanan, who is in her seventh season as an animator. 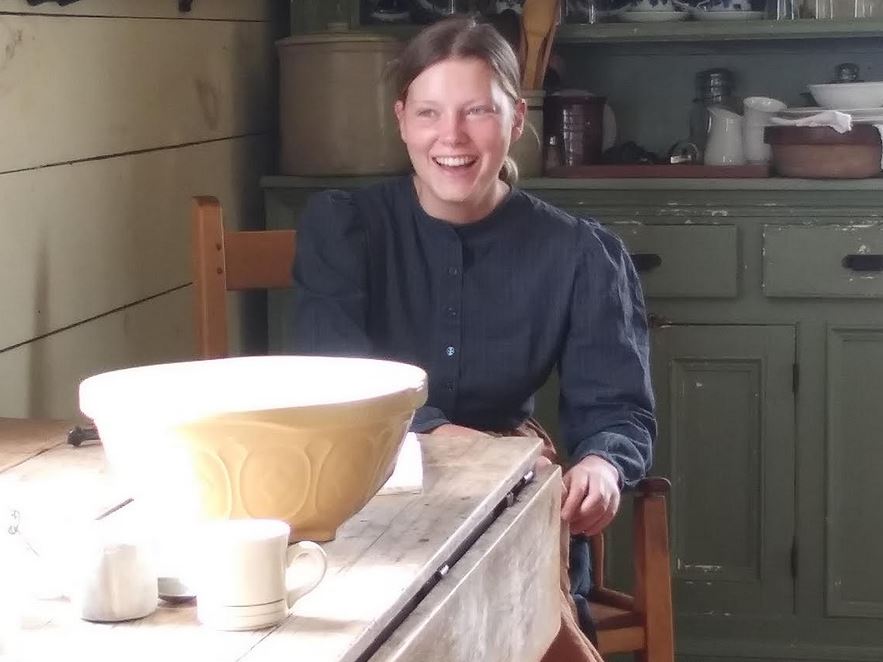 Donning the bulky garb of the era, she didn’t seem fazed by the smothering humidity of the morning, while I huffed and puffed as we trekked through the village community, which started with a challenging – at least for me – uphill climb. Wearing jeans and a buttoned shirt – both were black – probably didn’t help when it came to the beads of sweat that quickly accumulated on my brow.

Our first stop is a black house – taigh dubh in Gaelic – a replica of a typical home found in the Scottish Highlands during the late 1700s.

Before exchanging greetings with Catherine Gillis – the lady of the house – Buchanan explains that we are about to be part of a ceilidh, the Gaelic word for ‘visit,’ which doesn’t require music and dancing.

In her crisply white bonnet and apron, Gillis laments the challenges families are facing, conceding the move to a new land is inevitable.

“It provides a little bit of context,” says Buchanan of the approach taken by animators.

It is a masterful approach; rather than explaining it was like during those times, visitors are dropped into their lives. The animators engage people as if they are with them; just another neighbour who has joined the ceilidh.

After a quick stop at what looks like a glorified woodshed, which Buchanan explains served as nothing more than shelter for settlers braving their first winter here, we ‘ceilidh’ with Marie Chehy and Colleen Beaton in one of the more permanent homes. They chat about the heat of the day while offering thanks for the abundant growing season, with crops such as flax thriving. 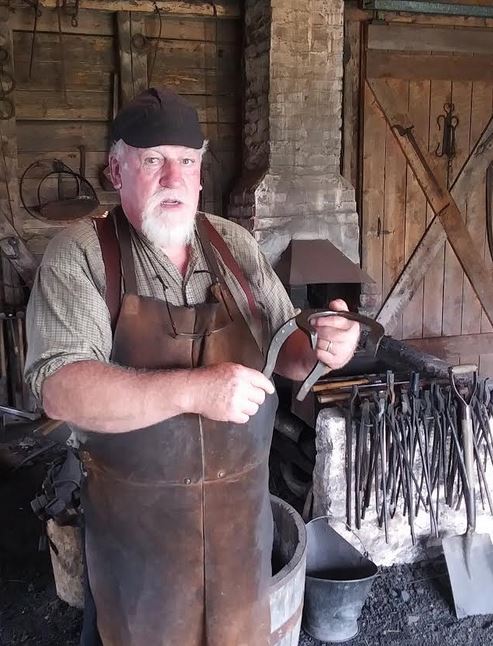 Austin ‘Alistair’ MacKenzie is the blacksmith at Highland Village.

Between visits, Buchanan deftly talks about points of interest, such as the sizeable gardens dotting the property, and the barns and corrals. She notes changes that have taken place because of the measures required in dealing with the global pandemic; the fenced-in areas that usually house the village pig and sheep are empty. Only the Clydesdale horse that spends each season there – Chaisson calls her the ‘Queen’ – has returned.

At the top of the hill stands the Malagawatch Church, circa 1874, which moved to its picturesque location in 2003. Its arrival was newsworthy – a barge carried the building of worship across the Bras d’Or Lake.

As we make our way to the next stop, Buchanan notes it is approaching the 1890s, which she described as the “peak of Gaeldom.”

Emily MacDonald makes adjustments to a malfunctioning spinning wheel, while Lili Watson prepares to make oatcakes in the kitchen of their home. While catching up, she and Buchanan agree getting the cooking completed as early in the day as possible – when the fire is its hottest – is the ultimate goal. 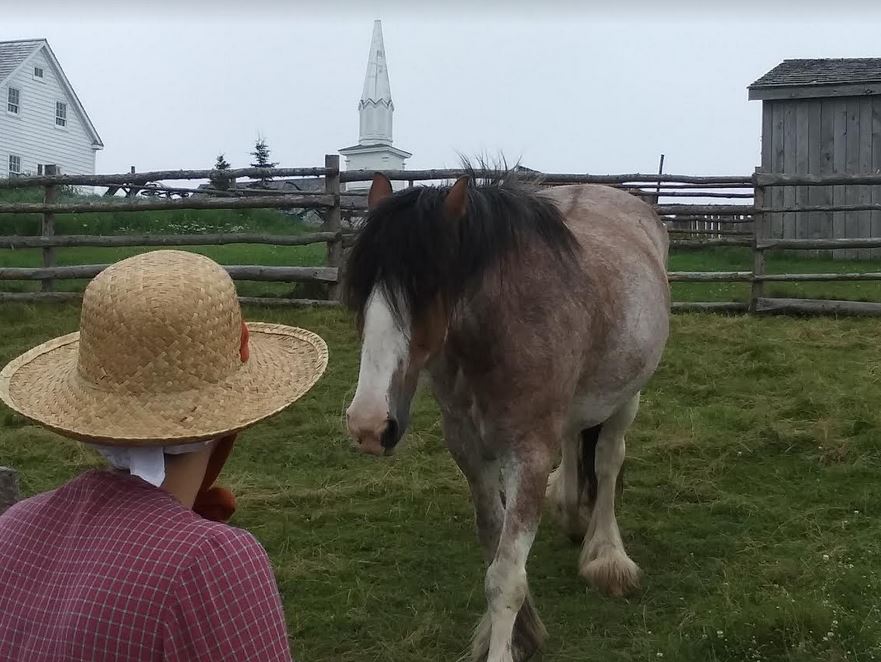 Animator Amber Buchanan greets the ‘queen” of the Highland Village, a Clydesdale named Mira Jean. Dell Corbett from Grand Mira loans her to the museum each year.

While in the entrance of the one-room schoolhouse, Buchanan removes a wooden paddle from a coat hook. She asks if I knew what it might have been used for, as she hung it around her neck.

Seeing my blank face, she quickly explains if a student was caught speaking Gaelic, they had to place the paddle around their neck. The only way to shake off the shame was to tattle on someone else for doing the same. The student wearing it at the end of the school day was strapped.

When we arrive at the general store, Jessica MacLean knits while waiting for customers to arrive. In one corner, there is a post office, while another offers the chance to purchase a tailored suit. Everything from flour and molasses to sugar and tobacco fill the shelves. It is prohibition time, so cough medicines are locked up in order to discourage thievery.

Orders made to the Eaton’s catalogue will arrive two weeks later on the train.

Blacksmith Austin ‘Alastair’ MacKenzie asks if “the train has broken down,” when he eyes me. 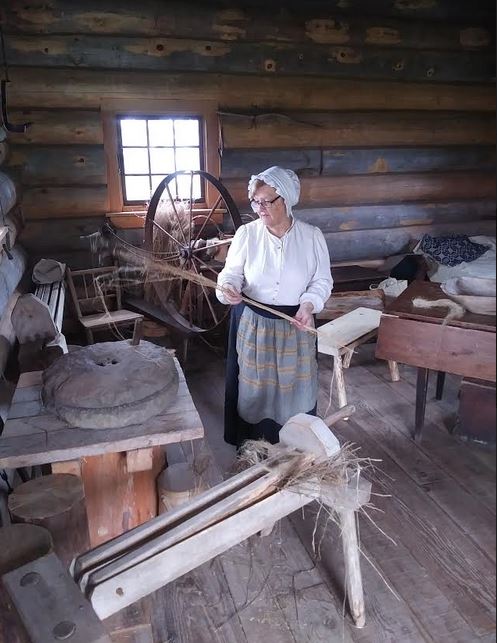 Animator Marie Chehuy with some of the flax grown at Highland Village.

Aileen MacLean greets us on our last stop. While crocheting without pause as we talk, she gestures toward the switchboard she operates, calling it her “ball and chain.”

“It doesn’t ring often,” she says.

Like many of her neighbours, MacLean is worried about the growing economic hardships. Her daughter is one of many who have headed to Boston. She praises her for sending money home to help the family.

“You have to watch your pennies,” she adds.

Speaking of dollars and cents, the museum board has launched a $3.6 million site development strategy. The construction of a new welcome and cultural resource centre will include interactive exhibits, as well as visitor service and interpretive enhancements.

All three levels of government have chipped in: $1.2 million from the province, $1.47 million from the feds and $100,000 from the Municipality of Victoria County, while the Nova Scotia Highland Village Society has amassed more than $350,000 of the $830,000 it has to pitch in. 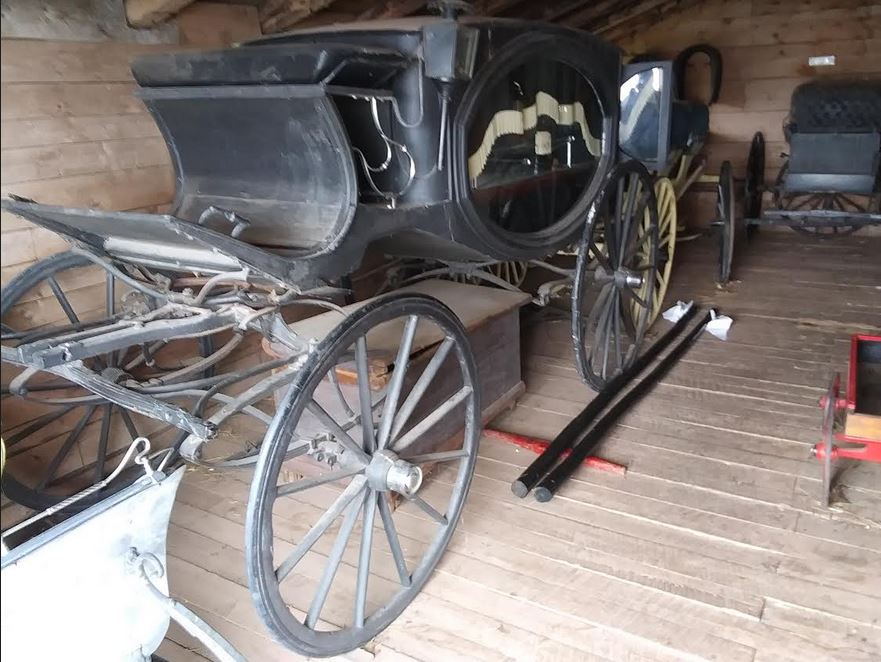 The carriage that carried the body of the late Alexander Graham Bell.

Chaisson says the goal is to enhance the visitor experience while increasing the capacity for programming and operations.

This pandemic truncated season has brought five consecutive years of growth to a screeching halt after last year’s more than 26,000 visits.

Cruise ship traffic from Sydney had become a boon. What had become the traditional season – June 1 until the weekend after Thanksgiving and the end of the world-famous Celtic Colours festival, and even into November to accommodate cruise ship visitors – had to be reshaped for 2020. 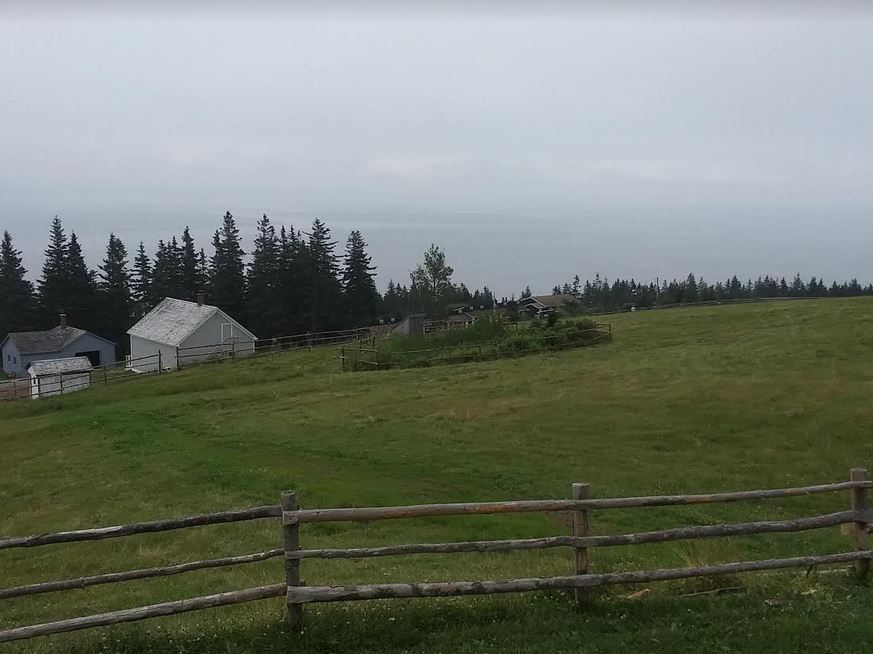 One of the breathtaking views of Bras d’Or Lake from the Highland Village.

“We are doing our best to continue to tell their story,” says Chaisson.