The Killing Of A Pet Crow: Pugwash’s Jill Mundle In Her Own Words On The Crow Her Family Named Konjo

Killing Of A Pet Crow: Jill Mundle In Her Own Words

This week there has been a lot of media reports about the killing of a pet crow at the hands of a Lands & Forestry wildlife officer, dispatched to an isolated beach in Pugwash.

The government department had fielded calls from two members of the public, that this tame crow as harassing humans – and the department says a lady, a senior, was knocked down on the beach, while other person had injuries to their face from this tame crow.

Everyone from CTV’s Steve Murphy to the Halifax Herald & Amherst News reported on this tragic situation.

I also spoke at great length to the pet crow’s family who raised the crow from a fledgling – rescuing the crow, after raccoons attacked and killed the other babies and crow parents – there are five crows to a family.

Jill Mundle raised the crow, and it did become climatized to humans – not fearing us, as normal wildlife tends to do.

Here is Mundle’s written statement, in her own words on the killing of her pet crow by a wildlife officer;

“On June 1st if this year, we started raising a crow nestling. To be clear, I am NOT saying it is okay to have a wild animal as a pet.

I am aware that this is illegal but with COVID and being home, we felt we could raise him ourselves. 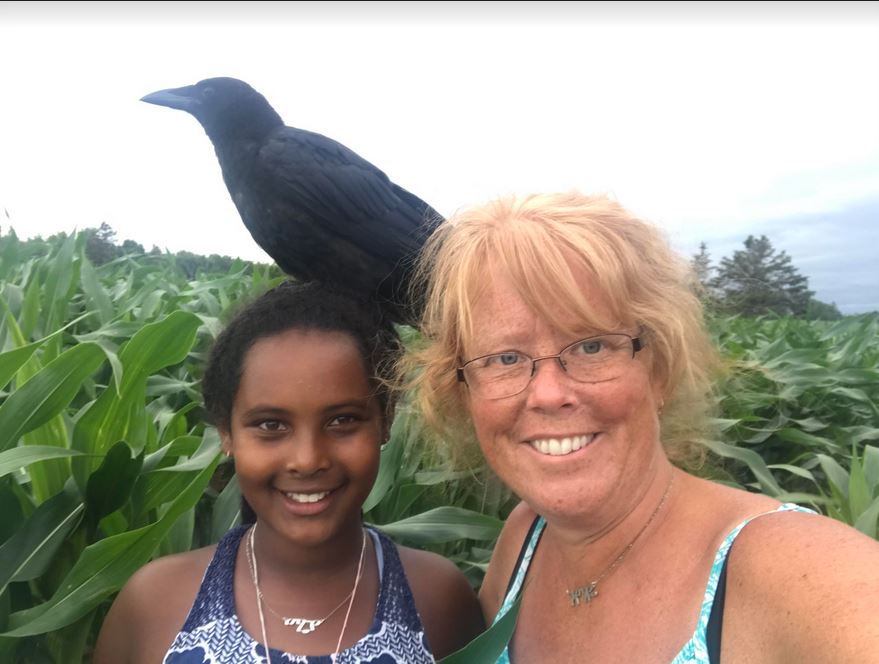 Jill Mundle, and her nine-year old daughter Mya, befriended a crow. They called it Konjo. A wildlife officer with Lands & Forestry shot the crow to death with a 22 rifle.

This required a huge commitment on our part and he had to be fed a balanced diet hourly from dawn to dusk.

My daughter Mya, named him Konjo which means Beautiful in Amharic.

During the summer months, my daughter and I live in a camper at the back end of our family farm. It is rather isolated, off-grid and to access it you must travel about 1.5 km through the farm fields.

We are on the Northumberland Strait. There is a picnic park down the shore from us (I am guessing about the same distance but the only way get there is to walk up the and bars when the tide is out.)

Some days there are no walkers but some days we may have 2-4 people walk up.

Our only neighbours are my sister and her family and my cousin with her husband.

As summer progressed, we had trouble with Konjo flying out to see these walkers. People either loved him or hated him.

Some tried to feed him or pet him, others tried to hit or kick him. Mya and I would watch and run out and tell people he was tame, please do harm him or feed him which only encouraged him to approach strangers.

I contacted the Canadian Bird Banding Office in Ottawa to see about having him banded so a stranger may see the band and know he was not an ordinary crow.

He had a couple of bad experiences with children throwing sand, water and shovels at him which seem to make him have a permanent dislike of most children.

With these signs of territoriality, I contacted Hope for Wildlife to see what our options were. Should we take him to our winter home 10-km away?

Should we take him to her and have her release him later with her other crows?

Wild crows will often kill a lone intruder crow. We agreed since he was already foraging and bonded with a family of crows here at the beach, we would get through the next couple of weeks of beach strangers and let him stay here.

On Tuesday, August 19th at about 2 pm Mya and I heard the local crows screaming. I looked down the beach and saw the crows swooping at a stranger on the beach in front of my sister’s cottage.

Since the tide was in and we had just been away for an hour, my first thought was that it was a stranger that had stolen something (he was walking away from me).

I grabbed my binoculars and suddenly, I knew the man had Kongo. My daughter and I took after him yelling “HELLO!” and “PLEASE WAIT!”

He quickened his pace and disappeared around the corner. When I reached the corner, he was out of sight. I scaled the bank (both of us in bare feet!) but he was gone.

I quickly ran back to our trailer (through a cornfield) we jumped in our car and headed for the main road. By this time my normally easy-going daughter was sobbing.

I stopped at the family farm and when I saw the Lands & Forestry truck go by, I went after him, honking my horn and flashing my lights.

He finally stopped when I pulled alongside of his truck, with my window down yelling for him to pull over.

Now take a moment to picture this, it was not my proudest moment. My daughter was by this point wailing.

I asked him If he had just taken a crow. His response was “It didn’t belong to anyone.” I asked him if he had a permit to take the bird and he said “I am Department of Lands & Forestry), I don’t need a permit, I can do whatever I want with it!!”

I tried to ask about relocating, Hope for Wildlife etc. and he told me to get out of his way. I tried to stop him but he backed up and drove away.

I immediately called the Lands & Forestry office in Oxford and talked to the receptionist.

I called three more times before they closed at 4:30 p.m. I was told they would call me back shortly. Finally, at 6:38 p.m. I received a call from Lands & Forestry’s Reg Delorey, (district office manager) and he told me they had destroyed the crow onsite.

It was too late to do anything. By the time I stopped the technician, he had already killed the crow.

They said they had two complaints about a crow approaching people in the beach, because this could present a possible threat, it was caught and destroyed immediately.

He said the technician went to where he was told it would be, Konjo approached the technician and he grabbed him with his bare hands and took him to his truck and destroyed him immediately.

He said he shot him onsite.

I asked if anyone in the area had been contacted to see what the story was on the crow. He admitted no they had not.

I asked if he had contacted the landowner for permission to come into posted land, traversing crop fields. He hummed and hawed and said some Mundle gave them permission.

I spoke with my brother (the landowner), my father (he originally owned the farm), my sister (where the crow was captured), and my cousin (near where he parked) no one he spoke with anyone from DNR.

Wherever they got permission from it was not any of the landowners. I asked did they not have to advise people when they discharged a firearm on their property?

Again more humming and hawing. I asked why they did not call Hope for Wildlife and he did he said he was unaware I had been in contact with her.

I asked why they did not call her themselves, again more humming and hawing.

He did apologize several times and admitted it may not have been handled in the best manner.

Right or wrong, Kongo was our family pet. I have a lot of pictures and videos of him. Family members also have pictures. Strangers have reached out with stories, pictures, and videos.

Lands & Forestry showed no compassion to any of us or to the animal they are supposed to protect. The public has a right to know what they did and when they call Lands & Forestry about an animal it is not captured and relocated but killed.

They need to know they seized a family pet in front of a child and ran and killed it before we could reach them.

They need to show some accountability for their actions!”

– That is Jill Mundle’s recall of the events of the killing of her pet crow that she raised with her nine-year-old daughter.