The past year has seen some serious tire kicking over a bottle of 50-year-old single malt Scotch safely locked in a wooden cabinet at a Nova Scotia Liquor Corporation store in Halifax, but so far the rare bottle remains up for grabs.

This week, I checked with the NSLC and found the single malt bottle, with its commanding $31,000 price tag, is still for sale at the Port store on Clyde Street in downtown Halifax. I originally wrote about the bottle in May, 2017. 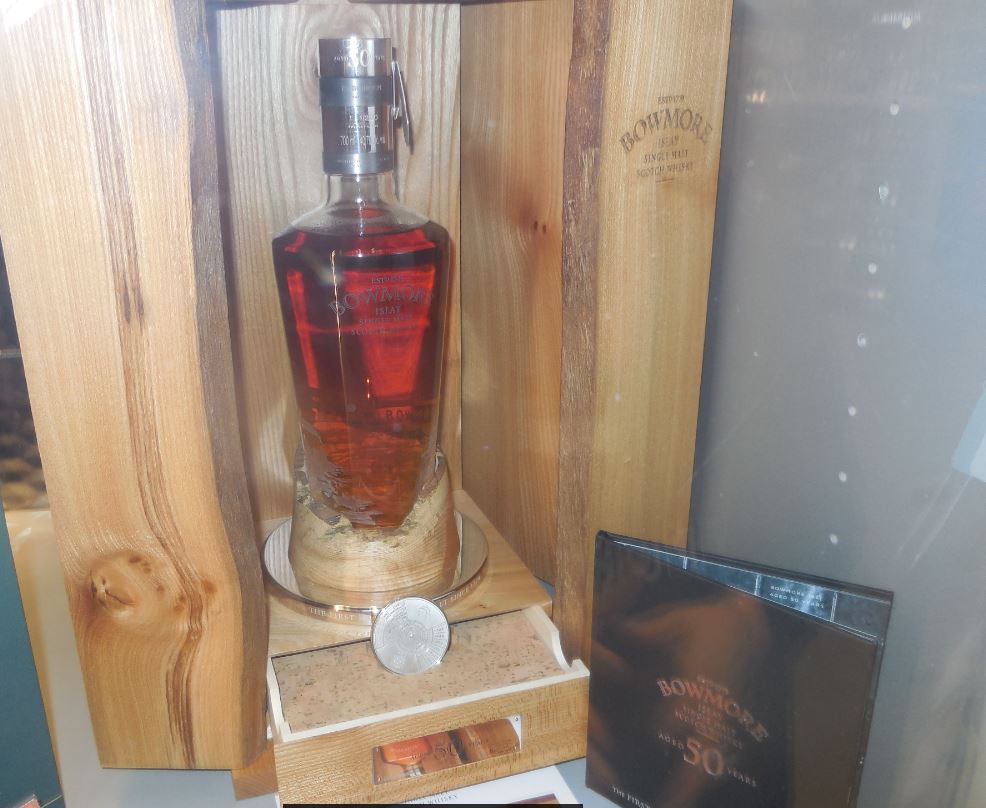 It is the only 750ml bottle of the rare scotch in the Maritimes. Only the high end of the ‘one percent’ of our society (including some of my subscribers) can actually afford to shell out dough to buy it.

Gabriela ‘Gabby’ Cyr of the Port store says the bottle of Bowmore’s finest is unique, a honey gold colour whisky in a hand-blown bottle, and comes in a custom-made wood case.

“It’s a wonderful bottle from the Isle of Islay in Scotland.

“In Canada originally, there were five bottles. Now there are only three — in Calgary, Ontario, and we have the third bottle,” Gabby told The Macdonald Notebook in an earlier interview. 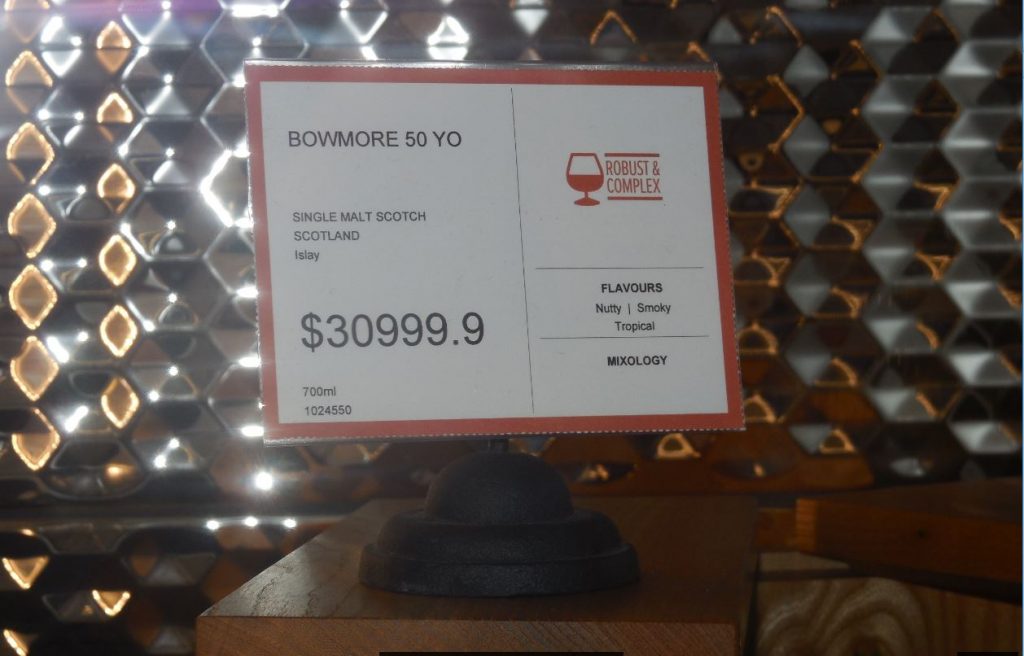 A Bowmore Single Malt on sale at the NSLC Port store in Halifax for $30,999

Don’t hope for a sample, however. “I am afraid that is not possible. We only have one bottle, which has been in the store for the last year.”

The Halifax store has other Bowmore selections, including a bottle for $59 of 12-year-old, which is one way to get a sample of the 50-year-old: Buy now and put away for 38 years.

“We have a great selection of single malts at the Port,” Cyr adds.

The Port store on Clyde Street (formerly the Port of Wines) is the new flagship store of the NSLC.

The $30,999 price for a bottle of Bowmore whisky is a sticker shock for many customers at the Port store who frequently then take selfies with the bottle, says store customer experience manager Dave Pierowa.

Interestingly, the bottle is $5,000 cheaper than an identical bottle in Toronto, so a canny shopper there might want to hop a plane to Halifax and save a few dollars.

“In 2013, only 200 bottles of this exquisite single malt remained and they have been released every year, 50 at a time, until now,” says a news release from the Ontario liquor corporation.

“Distilled in 1961, this was aged for 50 years in two ex-bourbon hogshead casks. These smaller casks allowed more of the whisky to have direct contact with the wood, introducing richer influence on the final whisky. 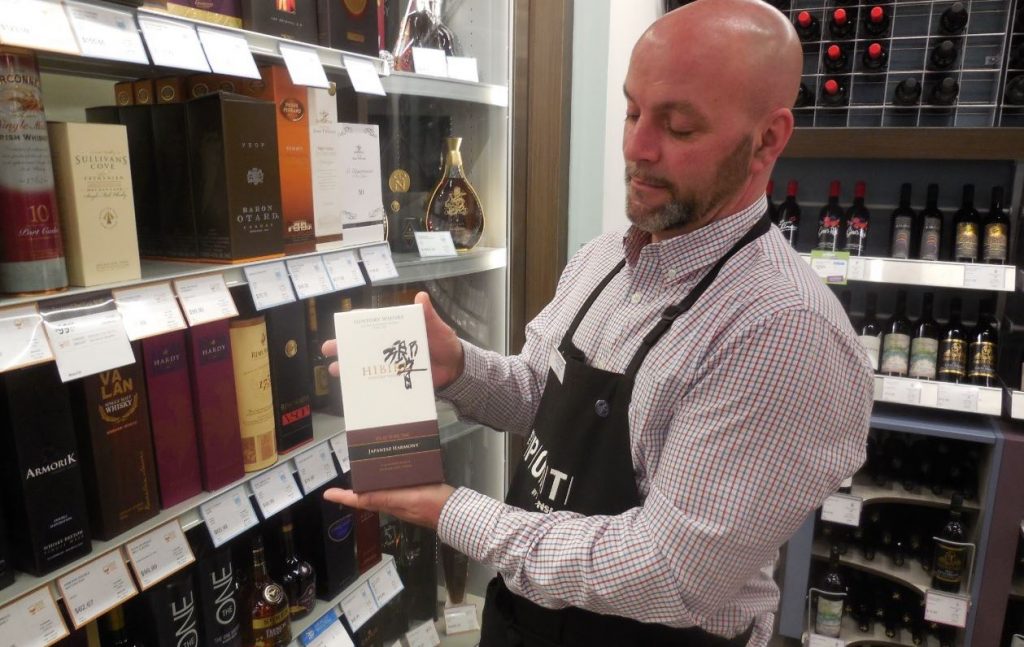 “This amazing collector’s item will have aromas and flavours of almonds, coconuts, tree oil, and citrus and tropical fruit with a gentle underlying smoke.”

Pierowa tells The Macdonald Notebook that he puts on an annual Scotch seminar for Port customers, and the last event was held in January. There is a single malt club that meets monthly at the Press Gang restaurant.

If the half-century-old bottle of Bowmore is out of your range — it is certainly beyond mine — there are other somewhat cheaper bottles that still will stretch a wallet.

Other bottles in the locked wooden case include: 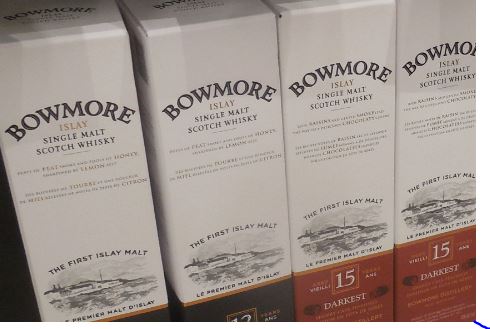 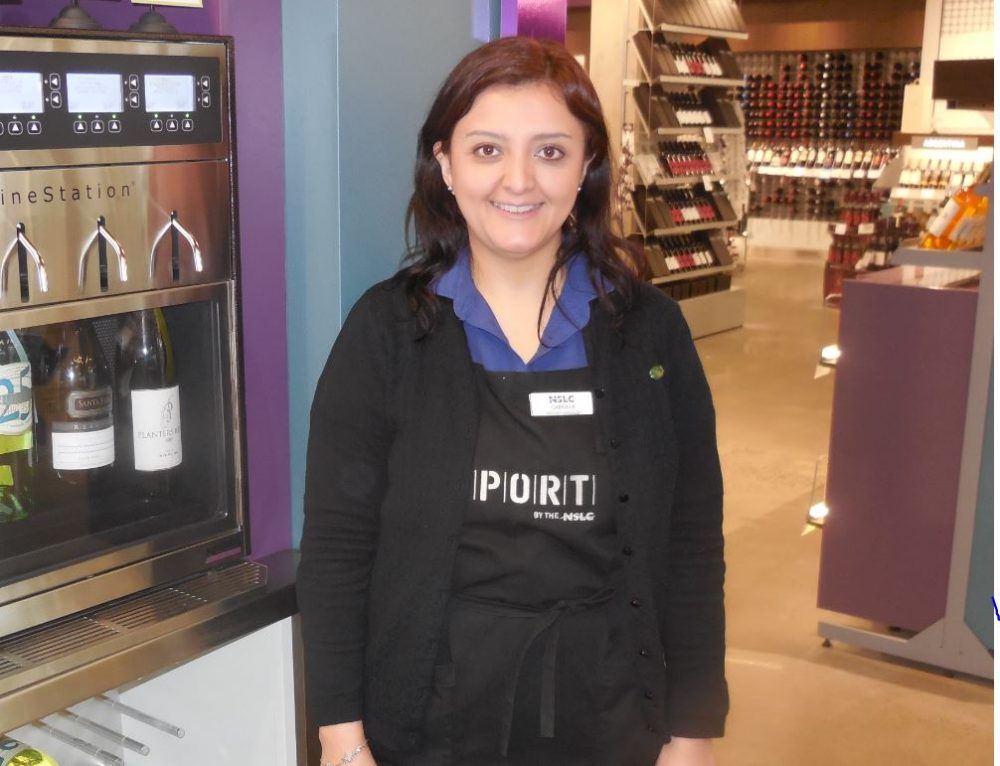 Gabby, at Port store in Halifax

At the Port, affable manager Rick Martell, a native of Richmond County, tells me single malt is enjoying a resurgence and outsells rum five to one.

Talisker from Isle of Skye sells for about $80

Millennials have been turning to single malt as they expand their drinking horizons. Many are studying scotch online, and are interested in scotch because their fathers would drink it. It also bought by senior citizens, and all kinds of folk in between, says Martell.