Further to my news scoop that Southport and Gorsebrook condo developer David Wex plans to bring his Midas touch to condo projects to the hot housing neighbourhood of the Halifax north end, a corner store operator who sold him the lands at Gottingen and Bilby streets is getting a big fat cheque.

According to the Assessment Nova Scotia website, George Israel, who operates a corner store on Almon Street, was paid $3.25 million for the four lots on the corner of Gottingen and Bilby streets, adjacent HMCS Stadacona’s new naval warship and Arctic patrol vessel training station, which Bird Construction built in recent times.

Assessment Nova Scotia’s website, since 2012, has listed the purchase and sales price of both residential and commercial properties in the province. So if your neighbour sells a home, or an office building in downtown Halifax sells, you can look up the sales price on the website.

George Israel had hired noted architect Michael Napier to design a 65-unit rental building for the property at Gottingen and Bilby. Existing buildings are boarded up, and covered by graffiti. There is also a vacant lot among the four individual lots that make up the parcel.

Bilby and Almon streets is ground zero for new rental buildings in the HFX Northend. The Notebook photo.

“Just a quick note to say that, as with Southport and Gorsebrook Park, Michael Napier will be doing the detailed working drawings for the new Bilby project” says condo developer David Wex.

In recent years, Israel operated a corner store on the property, but it was destroyed by fire so he relocated his popular corner store to Almon Street. It became a ‘do drop in’ centre for his neighbours who often would share their local news with Israel, a folksy and friendly shopkeeper.

At his store is a TV mounted on the wall and during the tenure of Jim Nunn as anchor of CBC’s First Edition evening news, Israel would tune in reliably.

I found Israel’s nightly loyalty to Jim Nunn fascinating, because the Halifax north end is home to CTV Atlantic’s newsroom, where Steve Murphy is the anchor. Incidentally, Nunn and Murphy were once brothers-in-laws.

As I reported earlier this week, condo developer David Wex plans to market this coming spring a 65-unit condo project to first time homebuyers, mostly millennials, the age group from 25 to 37. As I also reported earlier in the week, Larry Allen will be on the job to pre-sell the units. Allen sold the Gottingen and Bilby lands to Wex.

Allen is also the realtor of choice on the sales of the Gorsebrook condo units Wex has been building on Wellington Street close to the St. Mary’s University campus.

Wex tells The Notebook his purchase of the Israel property also included the Halifax City Hall development agreement that the corner store operator pushed through in the last three to four years. 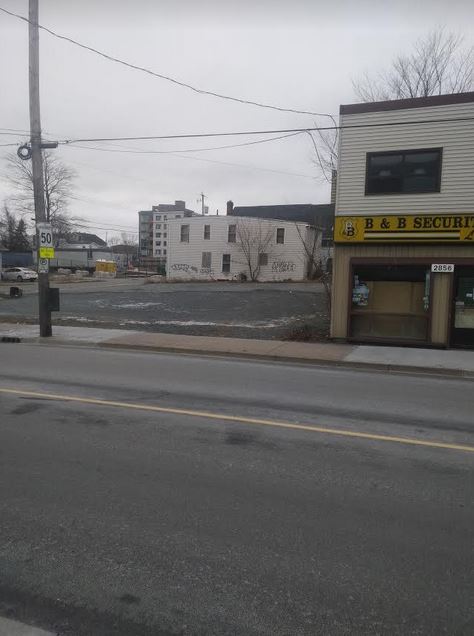 David Wex plans to bring a 65-unit condo building to these properties on the corner of Gottingen and Bilby streets. The Notebook photo

“We took the design under the existing development agreement and hired Breakhouse to (revamp the design), the way architects Alliance did to our Gorsebrook Park building,” Wex tells The Notebook.

At Gorsebrook, Wex also bought an approved development agreement on that property on Wellington Street in the city’s south end.

David Wex has bought the corner of Bilby and Gottingen streets for his next condo in the HFX Northend. The Notebook photo.

The Gorsebrook development agreement was pushed through by developer Steve Tsimiklis, who has a history of getting controversial property developments approved by City Hall, and then subsequently sells approved plans.

In the north end, the dominant developments of the last five years have been apartment projects such as Alex Halef’s 19-storey Point North, Louie Lawen’s St. Joseph’s Square, and Robert Margeson’s Monaghan Square. 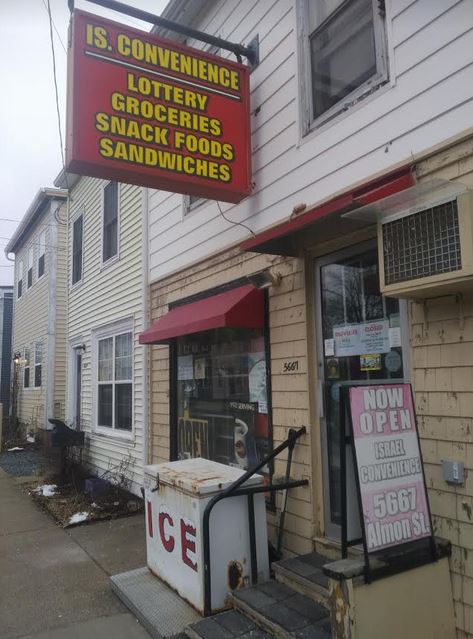 Illustrating how successful those relatively new apartment buildings have been, each now has a waiting list of prospective tenants. So a condo project in the north end’s flame hot housing market will likely be very successful. And I’d say that is more so because Wex has a track record of selling out his Halifax condo projects.

Besides Southport, he has met with tremendous sales success with his Gorsebrook Park condos.

“We are going to be doing a condo project on the corner of Bilby and Gottingen, and that is a site we closed on Thursday,” realtor Larry Allen tells The Notebook.

“We hope to be able to launch into the market place in the spring, but that has yet to be confirmed, based on a revised development agreement we are tweaking.” 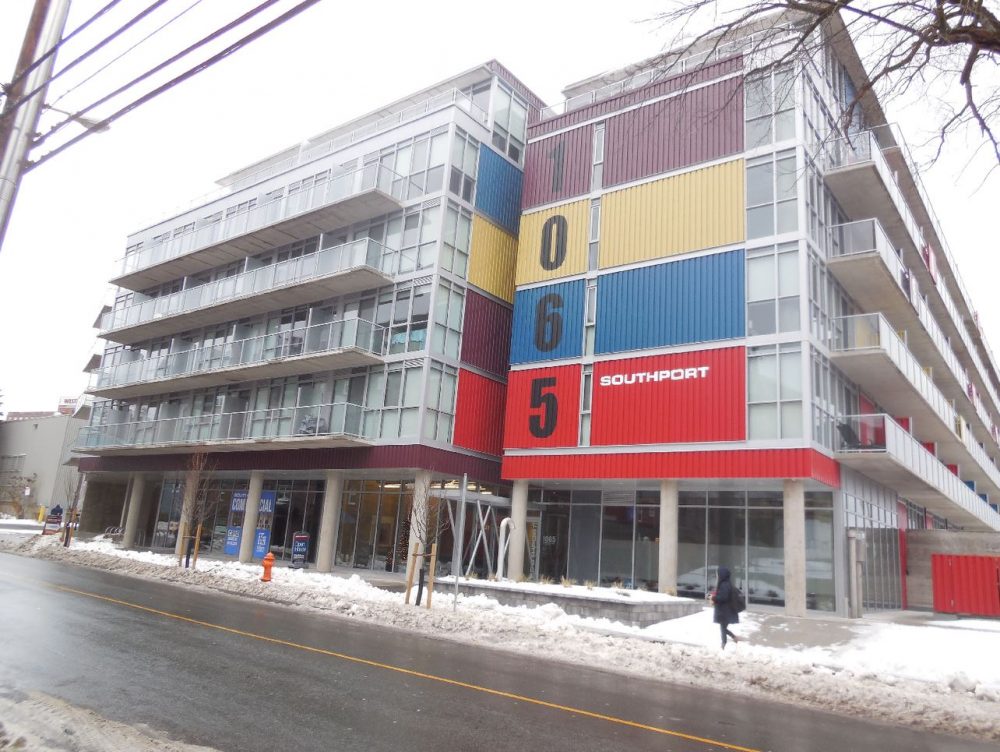 Allen will sell the new condo project with its planned 65 units, and he has also been selling Wex’s Gorsebrook on Wellington Street in the city’s south end.

“We are finishing on a building at Gorsebrook. There are 154 in the two buildings on Wellington Street and we have sold 131 so far,” says Allen.

Condo owners are occupying phase one of Gorsebrook, and it closes next month, and phase two will be ready in May for occupancy.”

Allen does not know the price points for Bilby condos.

“We will be going after the millennial type buyer, that will be the emphasis on the marketing — millennials from 25 to 35,” he says.

Because of the dearth of north end condo proposals, Allen believes Wex “will have very good success on Bilby. We think we will be very successful there.” 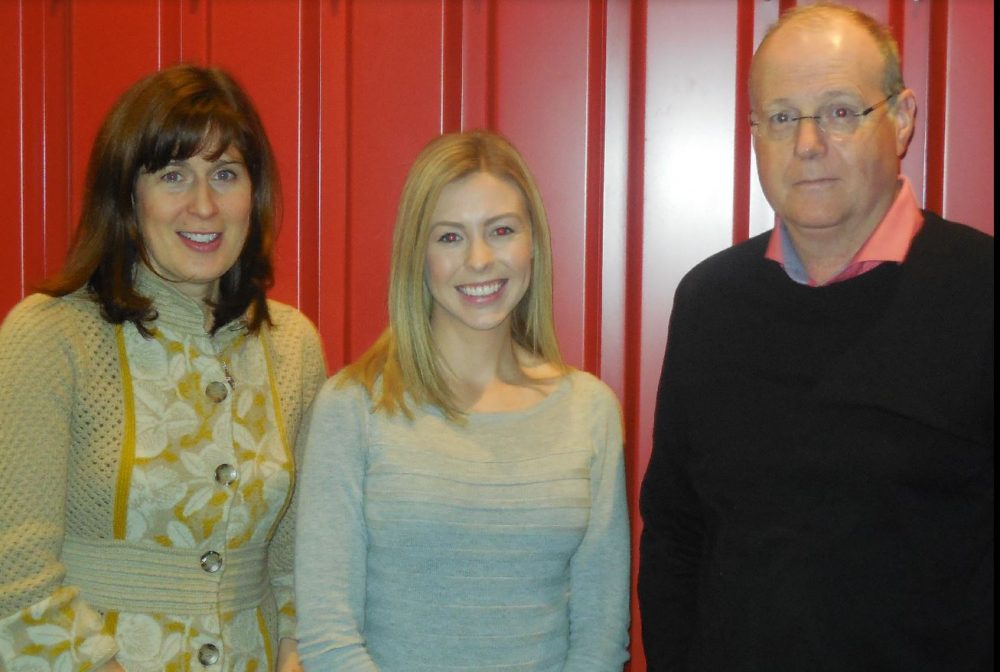 “I think it’s great that there’s a condo building planned amidst the rentals in the Bilby area. It will be nice to have some more residential options there and there are certainly buyers looking to live there,” Porter tells The Notebook.

As I have been reporting in recent issues, leading apartment developers are flocking in droves to the city’s north end.

The north end is mostly attracting apartment developers, there have been few condo projects in recent times. Four years ago, Peter Polley did a condo building on Roberts Street, dubbed Q-Lofts, which is now sold out. 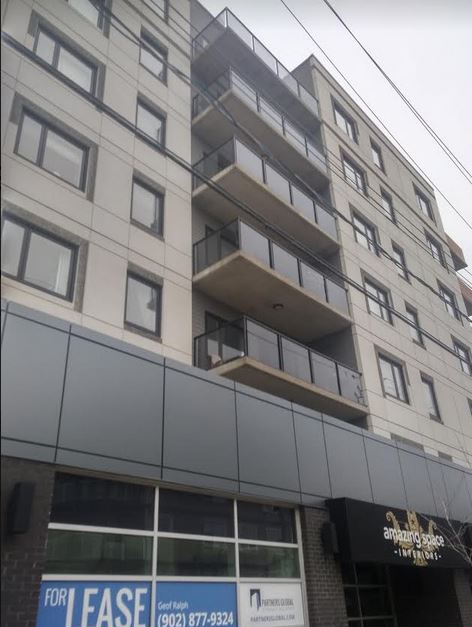 Almon and Bilby streets in Northend Halifax is ground zero for new apartment and condo projects in recent times. The Notebook photo.

Besides that condo, back in 2003 Danny Chedrawe began to build the Gladstone condos. And in the last 10 years, Ken Rowe’s IMP Group did the Hydrostone Condos on Isleville and Russell streets.

Prominent Red Door Realty’s Denise MacDonell believes the Wex condo project on Bilby Street will be highly successful, addressing what she tells The Notebook is a pent up demand for quality condo projects in the city’s north end.

“What I do know is that a lot of developers are electing to do rentals, and not condos in the north end, because the return is greater,” MacDonell tells The Notebook.

“That is unfortunate because there is pent up demand for new condominiums on the Halifax peninsula.”

David Wex plans to bring a 65-unit condo building at the corner of Gottingen and Bilby streets. The Notebook photo.

As for Wex’s first condo development in Halifax, it was the highly successful Southport Condos on southern Barrington Street, adjacent a busy Brent Stratton Tim Hortons. It opened in 2017.

That building is a dual condo and apartment complex, which was developed by Halifax-based Killam REIT and Wex’s Urban Capital of Toronto. The units were priced for first time home buyers, under $300,000 per unit.

“Southport has been a big success, for both the developer Urban Capital and Killam,” MacDonell told The Notebook in 2017 when the building opened to its first residents. Many of the units quickly pre-sold in 2015, during the first weekend of sales.

“It is a unique development model in Halifax,” says MacDonell, referring to the apartment and condo project.

Killam controls 70 units in the building, operating them as rental units.

Back in 2017, Killam’s CEO Philip Fraser gave The Notebook a tour of Southport. Fraser told me he would consider another condo-apartment partnership with Wex, but suggests the next dual project would consist of a separate condo and rental tower on a common foundation.

Southport, says Fraser, is poised to eventually become an iconic structure, as its exterior architecture features designs based on container shipping boxes since Southport is near Halifax’s south end container terminal.

MacDonell said co-selling the condo portion “was exciting” for her and co-agent Ian MacIntyre.

“Ian had tremendous belief in the project and I was eager to get involved. I was new in the business and wanted to learn,” says MacDonell.

“The year we launched the project (November 2013), I closed the sales centre at 4 p.m. Christmas Eve, and opened it at 9 a.m. Boxing Day. We had a steady stream and, as you know, it sold quickly and well.”

“Ian has been an outstanding mentor, and Michael Gillan and I have had a blast working together. We feel like we have been to Condo University.”

Southport has a mixed demographic, everything from graduate students to investors to down-sizers, she says.

“We have seen a lot of parents helping their adult children get into their first property, and there are a few folks who just want a pied-à-terre in the city.”

Interestingly, there are quite a few women purchasing on their own, and this is an increasing demographic in home buying overall. 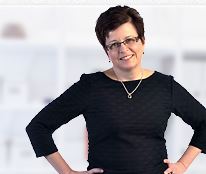 Red Door Realty’s Denise MacDonell says there is a pent up demand in the north end for condo projects.

Southport was constructed by Marco Maritimes.

Both Loblaw and Sobeys operate in the neighbourhood, while Tim Hortons is an immediate neighbour of the steel and concrete constructed building.

“The units themselves have a high standard finish level, with quartz counters, stainless appliances, in-suite laundry, engineered hardwood, and all are air-conditioned,” says MacDonell. “Many of the units have sold without parking.”