The Killing Of A Pet Crow, Part II: Hope For Wildlife’s Hope Swinimer: ‘Destroying the Crow Was Unethical, We Could Have Rehabilitated It Back To The Wild’

Killing Of A Pet Crow: Hope Swinimer’s Hope For Wildlife Says There Were Options – Including Her Animal Rescue Operation

Hope For Wildlife’s founder and visionary, Hope Swinimer says the killing of a pet crow on a beach in Pugwash was unnecessary.

The pet crow, named Konjo by Jill Mundle’s family, including nine-year-old daughter, was killed by a Lands & Forestry wildlife officer, responding to two complaints the crow was intimidating folk walking the beach, earlier this week, with its life ended at the barrel of a 22 rifle.

The crow landed in the hand of the wildlife officer, who went to investigate and destroy the bird.

Question: Should not the wildlife officer made the thought this was a tame crow landing in his hand?

Swinimer replies to The Notebook: “In my opinion, you would assume that. I think it was very unethical to destroy the animal. There was another option and a much better option – and I think that option should have been to bring the crow to Hope For Wildlife if they were concerned about public safety”.

Mundle phoned Hope for Wildlife on Monday of this week and wanted to see if the wildlife rehabilitation centre in HRM’s Seaforth, seven minutes from Lawrencetown Beach.

“She told me what she had done (raising the crow from a fledgling, and she felt really bad about the fact she had tamed the crow. But, she took some really good steps at her cottage – there was a family of crows who had been there for dozens of years, and sadly that family lost all its babies due to a windstorm”, says Swinimer. 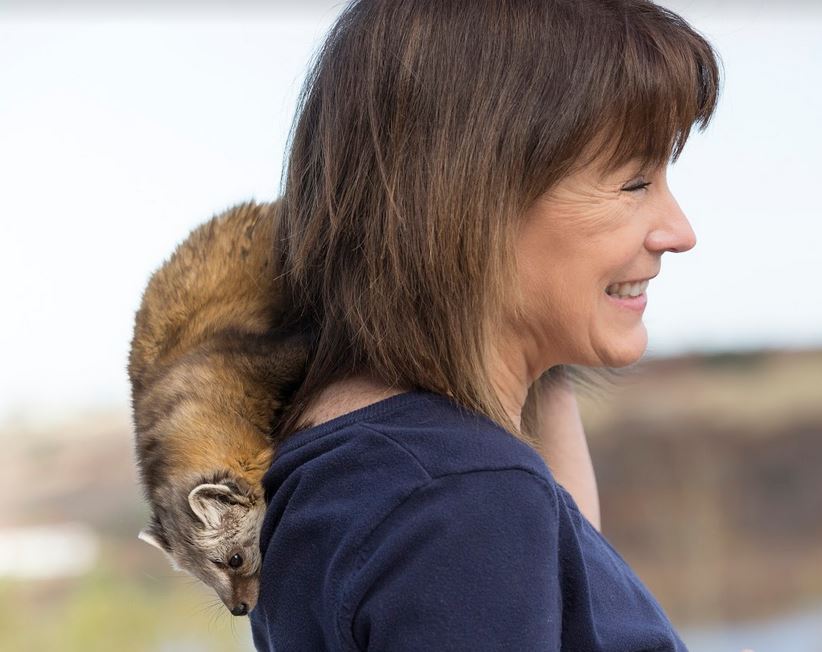 Hope Swinimer says her 25-year old Hope For Wildlife would have taken the Mundle family’s pet crow and rehabilitated it back into the wild.

“She gave her pet crow to this family, to see if she could introduce it, and the crows accepted it – and she was doing all the right steps to get this animal to go from being tamed to go back to the wild”, adds Swinimer.

“I told her, we, Hope For Wildlife, is more than happy to take the crow, if the crow causes trouble, such as too much interaction with humans. But it sounded like quite a deserted area, once the cottagers left. So, it might have been a very good place to introduce it back to the wild”, she notes.

“But I did offer to take it, and winter it over with our crows, and hope it would go back to its wild ways and learn the wild ways”, says Swinimer.

“We are about 70% successful when Lands & Forestry brings us an animal, whether it is a raccoon, we have a 70% success rate getting it back out to the wild”.

Question: What is the relationship between Hope For Wildlife and Lands & Forestry, do the wildlife officers get a call of a nuisance animal, and automatically destroy it, or take it to your centre for rehabilitation?

Swinimer replies: “Well like they say, it is their decision. They feel they own the wildlife, so it is up to them to decide. Depending on who I am speaking with, there are many within Lands & Forestry who are more than happy for me to take the animal. I will drive out all over Nova Scotia to pick up an animal and bring it in for rehabilitation, but there are some districts in Lands & Forestry who do not do that – there is no overall policy in the provincial government to use our services”.

“They know where we are and we are free of charge if they want to use us – we’re always happy to be there for them, but some departments choose not to do that”.

Question: Was the wildlife officer right to kill this pet crow with his 22-riffle, and take it to an isolated cornfield where he discharged his firearm?

Swinimer replies to The Notebook: “I think it was very unethical to do what he did when there are other options. Hope For Wildlife is here for that, they understand that. We have a (government) license to rehabilitate animals, and it certainly would have been worth a try for us to try to rehabilitate this animal”.

Hope for Wildlife in HRM’s Seaforth released a dozen crows back into the wild this summer. Hope Swinimer photo

“Why would you want to kill an animal when there is another option – and we are a very good option. We have a wonderful crew, we are inspected by Lands & Forestry, we have a permit to (worth with wildlife), so in my opinion, it was not an ethical move (to kill the crow).

Media reports said the wildlife officer euthanized the crow – but I am saying he killed the crow – after all the four-month-old crow was not in distress, was not injured when its life was ended.

“Every single day this time of year we get animals dropped off that people bring in, and they are a little sheepish and they tell us, ‘We thought we could make a pet out of this, but we realize it will become wild, and will you take it’”, she says.

“So a big part of what we do is help these animals that perhaps people had the best intentions and they thought they could rehab it. But here we have the proper training, and we can put these animals in with others – so we have a bobcat which was someone’s pet for two-and-half months, but because we have other bobcat babies here, and we put them all together and they get wild very quickly”.

“That’s the same as for raccoons, squirrels, songbirds, and crows – this time a year there is hardly a day that goes not go by that is imprinted on a human being, but we can fix that”.

Mundle decided to rescue the fledgling crow, after raccoons killed off the other fledglings and crow parents – there are five crows to a family.

While Mundle tells me she does not condone turning wildlife into pets, she did raise this crow and it became accustomed to humans, and Lands & Forestry then said the pet crow knocked down a woman, a senior, walking on the Pugwash beach, and injured another person’s face,

Question: Did Mundle do the wrong thing by raising this crow, instead of immediately taking the fledgling to Hope For Wildlife?

Swinimer replies to The Notebook: “Well, it is always better to get them into a rehab right away. And she knows she probably didn’t do the appropriate thing. But, at least her actions came from a place of caring”.

“In answer to your question, she should have brought it to us right away, that is what we tell the public, for the best results and best well being of that wild animal – it’s best to bring it in as quickly as possible, so it does not get too familiar with people. That is really important”.

Swinimer replies to The Notebook: It is, and that is an interesting question. And, I love this question, because for years if people say, ‘You are interfering with nature, I would always say ‘no’. Why are dealing with what humans have caused. That animal that gets hit by a car, that window strike, that domesticated cat or dog that injured a wild animal. We are dealing with our garbage tangled up in wildlife – 100%, no, we’re not interfering with nature, we are simply taking responsibility for human actions that are destroying wildlife”.

“Why shouldn’t we as human beings if we see a chance to help nature along, I see no arm to help it along, to help balance the negative impact humans have on the world each and every day. I really believe the more caring and compassion we can show to nature, it will have a wonderful effect”, says Swinimer.

Hope For Wildlife just released a dozen crows, who were brought in as young babies in the spring. We have another six to eight crows that will be wintering over – and I was thinking of Jill (Mundle) had brought that crow to me, it would winter over with these few”.

Question: Might the plethora of media coverage on the pet crow’s death by a wildlife officer’s 22-rifle, and social media mentions, change the Lands & Forestry first option to destroy a nuisance animal, as opposed to asking Hope For Wildlife for help to rehabilitate the animal?

Swinimer replies to The Notebook: “I would like to think so. But I have been working at this for 25-years, and I have been working very hard at this hoping to see change – but so far, we are not making a lot of headway, but I certainly as an optimist, so I am really hoping this one incident is an opportunity for the public to speak up and perhaps have change happen – there is options in Nova Scotia, other provinces do it, and we are more than happy to help, and we know at Hope For Wildlife we can do it, and do it well – and there is no cost to the government”.